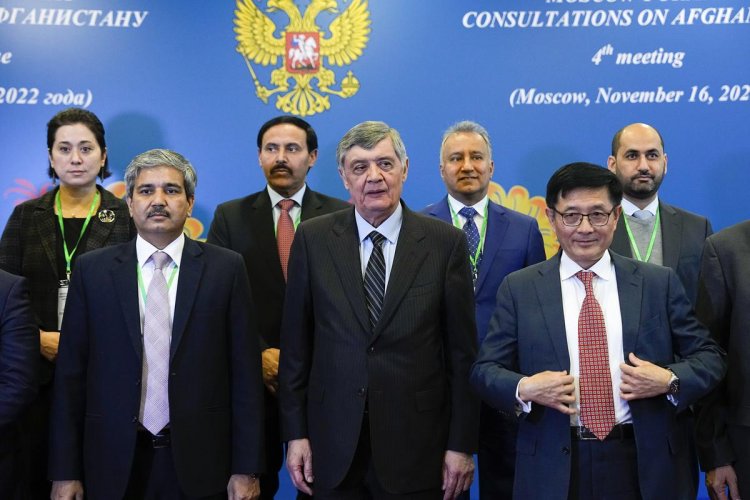 India participated in the latest meeting of the ‘Moscow format consultations on Afghanistan’ that was held Wednesday in the Russian capital. The Moscow format — one of the several dialogue platforms on Afghanistan — which began before the Taliban takeover of Kabul, consists of Russia, China, Pakistan, Iran, Kazakhstan, Tajikistan, Kyrgyzstan, Uzbekistan, Turkmenistan and India.

Joint Secretary in-charge of the Pakistan-Afghanistan-Iran division of the Ministry of External Affairs, J.P. Singh, represented India at the talks.

Singh had led a humanitarian delegation to Kabul in June when he met with the leading Taliban figures and handed over the large consignments of medicines and medical equipment to the Afghan people. Preliminary reports suggest that Wednesday’s talks were held without the participation of any Taliban representative. Taliban spokespersons are yet to explain the reason behind this absence.

MEA statement: “During the meeting, the participants discussed issues Ralte to Afghanistan , including the current humanitarian situation and the ongoing efforts of various stakeholders to provide assistance, intra-Afghan talks, formation of an inclusive and representative government, efforts to counter threats of terrorism and ensuring regional security,” said the Ministry of External Affairs (MEA) in a statement.

The meeting was announced earlier this month by Zamir Kabulov, Special Representative of the President of the Russia for Afghanistan.  Kabulov had outlined that the conference would try to discuss some of the negative  trends started by the Taliban in the last one year. A veteran Afghanistan-handler from Moscow, Mr. Kabulov has been championing a “trans-regional approach” to stabilise Afghanistan.

Apart from the members of the Moscow format, guests from Qatar, Saudi Arabia, Turkey and the United Arab Emirates were invited to take part in the discussion. India, Russia and Iran are expected to form a separate group within the format to discuss specific concerns regarding the security situation in Taliban-ruled Afghanistan.

Military infrastructure unacceptable: A joint statement which India signed following the  meeting terms as ‘unacceptable’ the military infrastructure facilities built by other nations in that country. While Russia and Pakistan perceive this line to be a reference to the US, Delhi’s view, according to information with Shubhajit Roy (Associate Editor and Deputy Chief of National Bureau, Indian Express. Delhi) “is that it is about Pakistan’s military presence there.”

‘It was stressed that the placement of military infrastructure facilities of third countries in Afghanistan and in adjacent states is unacceptable,’ said the joint statement.

‘Financial burden’ for the post-conflict reconstruction: The joint statement said the participants were also ‘convinced' that ‘forces responsible for the 20-year military presence' in Afghanistan should take on the ‘main financial burden’ for the post-conflict reconstruction of its economy without intervention in its internal affairs.

However, it also specified that ‘most of the delegations’ agreed to make a call to compensate for the damage caused to Afghan people during the years of US-NATO presence. This, learns The Indian Express,  “suggests that India may have opted out of this call.”

Rights and freedoms of the population: Referring to the Taliban regime, the statement said, ‘The strengthening of Afghan authorities’ efforts to ensure the basic rights and freedoms of the population were noted as important. The sides also expressed their support for the fundamental rights of all ethnic groups, including minorities, women and children, providing equal access to justice and education respectively.’

Commitments to Afghanistan: The joint statement said the participants reiterated their commitment to a ‘peaceful, unified, sovereign, independent and economically developing Afghanistan, free from the threats of terrorism and drug trafficking’.

On terrorism and drug trafficking: On the issue of terrorism, the statement said: 'Afghanistan was requested to fulfill its commitments to eradicate terrorism and drug trafficking emanating from its territory, take more visible steps against all terrorist organisations, and to firmly fight, dismantle and eliminate them, so as to ensure that Afghanistan would never again serve as a breeding ground, safe haven or source of proliferation for terrorism.’

Inclusive government: The statement underlined the need to form a ‘truly inclusive government in Afghanistan’ reflecting the interests of all major ethno-political groups of the country. The importance of ‘practical engagement with Afghanistan’ in this regard was also highlighted, it said. India has established a team for this purpose at its embassy in Kabul.

Space: Private Sector is in The Game of Launches and Satellites

Putin Misadventure in Ukraine: Implication for India and Asia

India - China: A Better Understanding of China by Indian...