An Electoral Setback will Hurt the BJP on the Farmers’ Issue 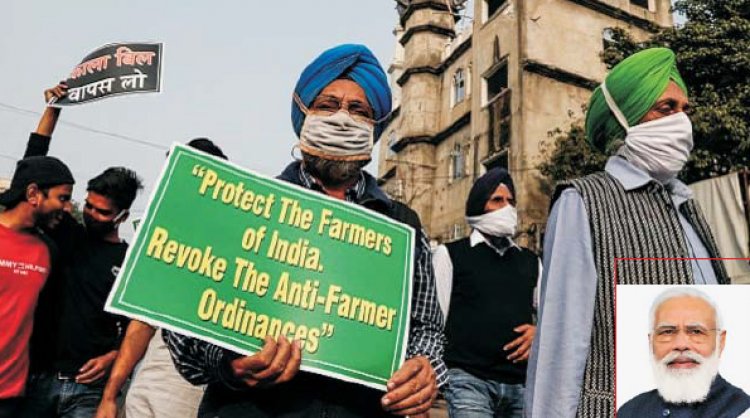 Of the five elections that are to be held soon, the BJP can look forward with a fair degree of certainty to success in Assam and Puduchery. But it is certain to lose in Tamil Nadu and Kerala and perhaps also in West Bengal if the opinion polls are to be believed. What this means is that the electoral score line is likely to be 2-3 against the BJP.

For the party, this outcome cannot be satisfactory in view of the enormous effort it is putting in to come out on top, especially in West Bengal, a state on which it appears to have set its heart. Even in Assam, the BJP is expected to face stiff opposition from those who are not pleased with its citizenship policies relating to Muslims.

There is little doubt, therefore, that a failure to storm the electoral scene with runaway victories will undermine the BJP’s ability to push through the agendas of its choice. As a result, the party can no longer expect the kind of easy success which it had in the aftermath of the 2019 parliamentary victory in implementing its pet projects like abrogating Article 370 and enacting citizenship laws.

The three farm laws, too, were apparently a part of this package of the BJP. They were intended to mould the political and economic scene to its liking. But the party evidently did not anticipate the stiff resistance which it would face on the issue with an ally, the Shiromani Akali Dal, walking out of the BJP-led coalition at the centre and thousands of farmers, mostly from Punjab, camping on Delhi’s borders to demand the withdrawal of the laws. Indeed, the pressure was so high on the BJP that it even offered to keep the laws in abeyance for a year and a half, a concession which was unusual for so surefooted a party to extend.

But the farmers have not yielded ground even after their movement suffered a loss of image because of the violence which broke out in Delhi on Republic Day when they brought hundreds of tractors into the city. There is currently a stalemate, therefore, with the two sides locked in an uneasy truce. It is obvious that both are waiting for the election results before taking the next step. In the event of a 2-3 outcome against the BJP, the party will undoubtedly be at a disadvantage. It is difficult to set terms after a setback. On their part, the farmers will interpret the outcome as a vindication of their cause.

As it is, the BJP has been on the back foot in recent months in the wake of the growing criticism of its authoritarian ways which are said to be eroding India’s democratic credentials. A number of reputed organizations in the West such as the V-Dem Institute of Sweden, the Economist Intelligence Unit of Britain and the Freedom House in the US have been giving India a lowly ranking in their indexes for democracies. The British parliament has even gone to the extent of debating the farmers’ agitation with a majority of the speakers berating the Narendra Modi government. The days, therefore, when the government basked in the glory of the “howdy, Modi” carnival in Houston in the US are gone.

The government’s and the BJP’s reactions have been predictable as when they rejected the support extended to the farmers by several international celebrities as evidence of a conspiracy. But the dismissal of the critics as motivated or ill-informed will not convince too many outside the BJP’s circle of supporters. It goes without saying that the farmers and other opponents of the government, such as those who are against the citizenship laws, will be pleased with the government’s discomfiture, especially if it is enhanced by the partially adverse election results. Assam and Puduchery are too small on India’s political calendar to be of much consequence for the BJP.

It seems likely, therefore, that the farmers’ agitation will continue in a situation which they will undoubtedly regard as favourble. Mercifully, they have called off their earlier threat to burn the standing crops when better sense prevailed. They also appear to have learnt the right lessons from the violent incidents in Delhi which gave their protests a bad name and enabled their detractors to allege that they are not farmers at all but only crafty middlemen who are unhappy about the possibility of losing their age-old clout in determing to whom the farmers will sell their produce and at what cost.

At the same time, it is also undeniable that considerable as their numbers are, the farmers remain an inchoate force with only a few self-appointed leaders and no distinct political or economic ideology except that of being anti-BJP because of the farm laws. If, for argument’s sake, the BJP withdraws the laws in accordance with the farmers’ demand, the latter will have nothing against the party. In that eventuality, the opportunity which the BJP’s political adversaries are now seeing in using the farmers’ discontent to undermine the BJP-run state government in U.P. will disappear.

It is necessary to remember that only a few years ago, the anti-Muslim sentiments of the Jat community, who constitute a large section of the protesters, were politically exploited to set off communal riots in U.P. Today, the Jats and the Muslims have overcome their past animosities and become friends again. But given the impermanent nature of such tie-ups, it may not take long for the situation to become combustible again. There is a need, therefore, to resolve the farmers’ issue to avoid the uncertain consequences of letting them drag on interminably. But there is no sign that either the government or the farmers has any ideas about ways to break the logjam.

Good Figures, But Uncertainty over the Medium Term