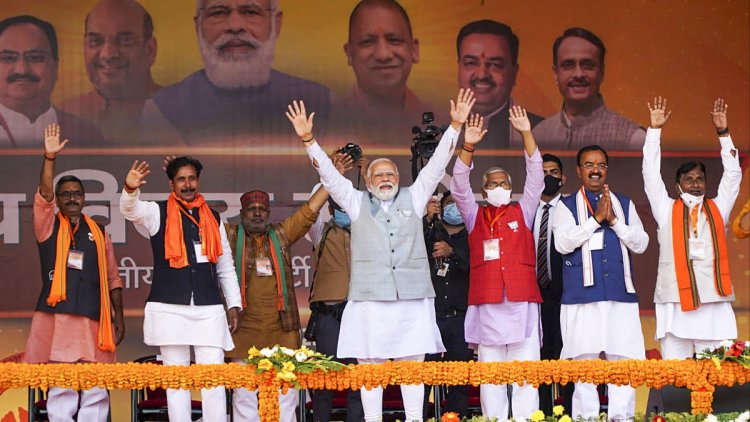 There is little time for speculation on the outcome of the Assembly elections in the five states of Uttar Pradesh, Punjab, Uttarakhand, Goa and Manipur. The results will be known on 10 March.

Voting ended in Uttar Pradesh on 7 March;  in Punjab, Goa, and Uttarakhand on February 14; Manipur voted in two phases - on February 27 and March 3.

Political observers and analysts are unclear about the outcome of the Assembly election.  Radhika Rameseshan (senior journalist) who has traversed Uttar Pradesh extensively, however assesses the BJP may find it hard to defend its government in the state. This is contrary to many other opinions that say the BJP has a clear edge.

Dalits and the Other Backward Classes (OBCs) may ditch BJP: Elements of the ‘India Shining’ glitz that lit up the BJP’s 2004 electioneering are missing this time. “The fear among Dalits and the Other Backward Classes (OBCs) of their jobs being on the line if public sector units are privatised is so palpable that those who voted for the BJP in 2017 are rejecting it this time; and for the young Dalits, the Bahujan Samaj Party (BSP), once an unquestioned choice, no longer seems that attractive. The Dalits and OBCs are afraid that privatisation would ring the death knell of their hard-fought right for statutory reservation in jobs…..

“The BSP maintained a low profile for the past five years and has not exactly re-emerged, guns blazing. Indeed, there are signs that the BJP and BSP would not be averse to striking a post-poll arrangement if circumstances demanded. Therefore, young Dalits veered towards the SP, calculating that it’s more important to unseat the BJP before taking a hard look at its core agenda…..”

Significantly, the departure of three important OBC legislators — Swami Prasad Maurya, Dara Singh Chauhan and Dharampal Saini — followed by their induction in the SP “weakened the BJP’s big tent social engineering fabric that hoisted its Hindutva and ‘nationalist’ ideologies to reinforce a sense of pan Hindu identity, and not of a caste-dissevered polity.”

‘Apathy of the better off segments towards the BJP’: Even the traders, wedded to the BJP for decades, writes Rameseshan “were ostensibly not that enamoured of the party this time. Those traders who doubled as agriculturists in villages complained that the business losses suffered during the pandemic were not recompensed by their crops because much was devoured by the cattle. Business families looked like they were divided in their support for the BJP. The consistently low turn-out in the urban areas in each phase so far is attributed to the apathy of the better off segments towards the BJP. The refrain was, we don’t wish to vote for the BJP but we can’t go for another party either."

Possibility of a BJP, BSP alliance in cases of a hung assembly

Political analysts are speculating on a hung assembly and the  consequent post-poll alliances that may be configured.

This thinking has been spurred by Union home minister Amit Shah in an exclusive interview to a news channel acknowledging the relevance of the Dalit based Bahujan Samaj Party (BSP). In a reply to a question, he said, “The BSP will get votes, but don’t know how much would it convert into seats.” Separately, four time chief minister Mayawati praised Amit Shah’s magnanimity in accepting the BSP's strength.

It is not common for Indian politicians to shower each other with praises, more so in the middle of elections, writes Sunita Aron (HT’s resident editor).  “As expected, his statement triggered umpteen speculations. One is well known: A multi-cornered contest that divides the anti-incumbency votes among other players is beneficial to the ruling party. As of now, anti-BJP votes have largely gone to the Samajwadi Party (SP), which is seen as the only party throwing a strong challenge to chief minister Yogi Adityanath and Prime Minister Narendra Modi. Muslims and some backward castes have, by and large, consolidated in the favour of the SP, as the people did not perceive the BSP as a serious contender.

“The perception also grew because, barring the chief minister, BJP leaders have spared the BSP and its leader Mayawati while making scathing attacks on Akhilesh Yadav and the SP. This may be because the BJP is desperate to win the votes of the Scheduled Castes, who are disillusioned by Mayawati’s toned-down speeches. Among them are also those voters, especially women, who talk of Modi and his largesse. The BJP leaders are hopeful of weaning them away from the BSP.

“On the flip side, political experts believe that Shah’s statement has triggered speculation about the state throwing a fractured verdict, moving away from the clear mandates it has got in all elections since 2007…….”

Pollsters also foresee the probability of a hung house.

In case of a fractured verdict, the role of Raj Bhavan becomes crucial. And in a hung house, Aron speculates “Mayawati’s role will become crucial for the BJP as the Congress, the Rashtriya Lok Dal, the Suheldev Bhartiya Samaj Party will choose the SP instead of the BJP, given their political animosity.

“And if at all the BJP has to depend on the BSP, then Mayawati will exploit the fluid situation to the hilt. She is a hard-bargainer and the BJP knows this from her past. Mayawati has formed the government thrice with the BJP's support and ditched them at her will…..”

Putin to the rescue: BJP narrative of a strong leader

In the above scenario, even the Russia, Ukraine war is being exploited by the BJP.

President Vladimir Putin’s decision to go to war with Ukraine, writes DK Singh (Political Editor, ThePrint) was “resonating in Uttar Pradesh, too.” Addressing an election rally in UP’s Bahraich, Prime Minister Narendra Modi spoke of the ongoing turmoil in the world. “When counting is on about what will happen tomorrow and the day after, should India be powerful or not)?” he asked, drawing cheers of approval from the crowd. Modi then asked them whether they like “a soft, careless teacher or police inspector.”

“Bharat becoming powerful is imperative not just for Bharat but for the entire humanity. Every single vote of yours will make Bharat powerful…. Don’t you want a mazboot (strong) teacher and daroga? Therefore, brothers and sisters, responsibility of such a big country, such a big state, should also be on strong shoulders, shouldn’t it? When there is time, tough leaders are needed.”

His colleagues in the Bharatiya Janata Party (BJP) took some time to catch the signal from Bahraich, but they eventually did.

A few days later, BJP vice-president Baijayant Panda was reminding people of “Uri and Balakot” terror strikes, which the Modi government avenged by launching surgical strikes on terror camp in Pakistan-occupied Kashmir in September 2016 and by launching air strike on terror training camps in Pakistan’s Balakot in February 2019.

Then, writes Singh there were TV images of BJP leaders welcoming Indian evacuees from Ukraine.

"The missing link in the 2022 poll campaign had been found, almost well in time,” argues Singh.

‘Muscular nationalism’ back on stage: BJP’s electoral messaging around  “muscular nationalism, was missing from the electoral discourse….It was also being missed by BJP leaders acutely, with anti-incumbency against the Adityanath government surfacing in the form of people’s complaints about lack of employment opportunities, stray cattle menace, and inflation among a host of others. Akhilesh’s attempted alternative alliance of castes and sub-castes wasn’t making things easier.

“It’s at this juncture that Russia’s Putin has chipped in, albeit unwittingly. The Russia-Ukraine war has evoked a lot of interest in India, with several TV channels, including Hindi ones, covering it from ground zero……”

Nobody in UP cares about whether Putin is right or wrong and about the Russia-China-Pakistan ‘compact’ and its implications for India. And  "who cares about the Modi government’s diplomatic dilemma?

“These finer details have little relevance in post-truth politics. The only relevant point, as BJP IT cell workers would tell you, is that India also has hostile neighbours. Therefore, the people must vote for strong shoulders — of Modi in New Delhi and of Yogi in Lucknow.”

Outcome of Assembly Elections: Round up of States

BJP’s popularity will be tested in U.P. next year