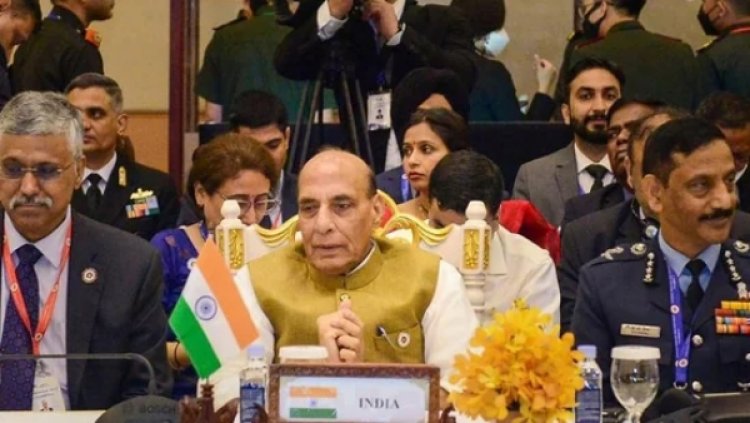 Minister of Defence Rajnath Singh participated in the 9th ASEAN Defence Ministers’ Meeting (ADMM) Plus in Siem Reap, Cambodia on Nov. 23. Defence Secretary Giridhar Aramane, Chief of Integrated Defence Staff to the Chairman, Chiefs of Staff Committee (CISC) Air Marshal B. R. Krishna and other senior officials of the Ministry of Defence and Ministry of External Affairs accompanied the Minister.

During his address to the ADMM-Plus forum, Rajnath Singh called for urgent and resolute global efforts to counter transnational and cross-border terrorism, terming it as the gravest threat to regional and global security. He pointed out that the global security environment has transformed fundamentally over the last few decades, with terrorist groups creating interlinkages across continents backed by new-age technologies to propagate ideologies, transfer money and recruit supporters.

The defence minister also drew the attention of the forum to the other security concerns that have emerged in the aftermath of the global COVID-19 pandemic, including challenges of Energy and Food Security. He stated that as a responsible member of the international community, India has worked with its partners, in extending humanitarian aid, medicines, vaccines and food grains on large scale.

Rajnath Singh reiterated India’s commitment to nurturing practical, forward-looking and result-oriented cooperation between India and ADMM-Plus countries for enhancing the maritime security in the region and safety of the global commons. He asserted that India advocates a free, open and inclusive Indo-Pacific region and calls for peaceful resolution of disputes while respecting the sovereignty and territorial integrity of all nations.

In this context, he stated that the ongoing ASEAN-China negotiations on the Code of Conduct in the South China Sea should be fully consistent with international law, in particular United Nations Convention on the Law of the Sea (UNCLOS) and should not prejudice the legitimate rights and interests of nations that are not party to these discussions. The defence minister called upon all the member states to work together with a positive intent, towards a stable, safer and more secure world for our future generations.