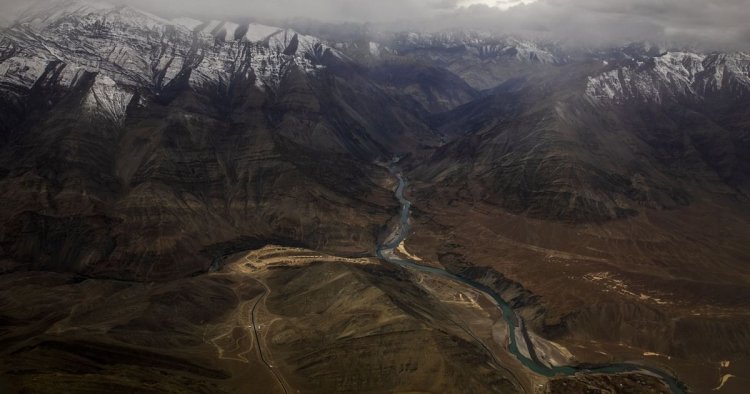 The two adversaries, India and China, are talking again. The military commanders of the two sides met for as long as 11 hours to show how serious they are about the need to “cool” down, as a Chinese spokesman said. Apparently, the violent clash which claimed the lives of the commanding officers of the two forces along with the casualties suffered by scores of ordinary soldiers has acted as a warning against excessive militarism.

The caution is all the more necessary because India says that the Chinese are occupying an area near Pangong lake while there has been a build-up of Chinese forces in northern Ladakh. This fresh intrusion in the Depsang plains suggests that the Chinese are moving the theatre of confrontation further west from the Galwan valley over which China continues to claim “sovereignty”. Besides, the Indian external affairs ministry has said that the Chinese have been amassing troops on the border since May. Because of these mixed signals, there is no clarity on the situation except that an early end to the standoff is not in sight.

While the army men were talking in the icy heights of the Himalayas, India’s defence minister, Rajnath Singh, was in Moscow, looking for a quicker delivery of the S-400 surface-to-air missiles while external affairs minister S. Jaishankar met his Chinese counterpart, Wang Yi, in a tripartite video conference along with the Russian foreign minister, Sargey Lavrov. This was the first high-level meeting between India and China since the border row took an ugly turn. But it doesn’t seem to have led to a thaw.

Notwithstanding all the powwow, the question remains about China’s objective behind the confrontation. Why did it bring in heavy armour ? Was it to demarcate a new Line of Actual Control (LAC) ? Or, was it a miscalculation in the expectation that India will easily yield ground ? If so, the ploy has misfired with India proving that it will not cow down to bullying tactics.

It has been a repetition, therefore, of what happened in Doklam two years ago when India stared down a similar incursion by China at the India-Bhutan-China trijunction. Because of the Chinese misadventure in Ladakh, the Indian external affairs minister’s advice to China at their Moscow meeting to abide by international rules will be seen to be eminently justified. However, the insinuation has predictably irked Beijing, for it has now accused the external affairs ministry and the Indian media of “false reports”.

Irrespective of such verbal duels, what is important is that unless Beijing modifies its conduct, whether in the South China Sea where it has violated the 2016 arbitral tribunal ruling in a case against it brought by the Philippines under the UN Convention on the Law of the Sea, or in Hong Kong where it has gone against the continuation till 2047 of the “one country, two systems” pledge which it gave to Britain at the end of the latter’s 99-year lease on the island in 1997, China will be seen as a rogue state. For a country which intends to replace the US as the No. 1 superpower and mould the world to its liking, a reputation of being an international scoundrel will not be helpful.

It will also be unhelpful for President Xi Jinping’s personal standing even in his own country. As it is, the social media in China has voiced annoyance over Beijing’s reluctance to acknowledge the casualties which it suffered in the Galwan clash. Such expressions of disquiet are unusual in a dictatorship. They recall the criticism which the Chinese authorities faced when it was suspected of suppressing the news of the corona outbreak in the early stages, thereby triggering a rapid spread of the disease. Now Xi is under pressure because the censure on this score has become worldwide along with calls for an international probe. Not surprisingly, it has been suggested that the Chinese intrusions in Ladakh are an attempt to divert attention from such internal tremors.

If Xi is being driven by domestic compulsions, his friend of Wuhan (2017) and Mamallapuram (2019), Narendra Modi, is also engaged in fending off critics at home with Congress leader, Rahul Gandhi, leading the pack which includes a few retired army generals and defence experts. The question uppermost in their minds is whether India has lost territory in the Himalayan heights to China’s canny salami-slice tactics. Given the fluid nature of the engagements and disengagements that are going on between the two armies in the barren 14,000/15,000 feet landscape, a clear-cut answer is not available. But, for the Indian PM, it is imperative that the Chinese remain on their side of the LAC.

Any hint to the contrary will be politically fatal for him not only because no leader can afford to be seen to have retreated before an enemy, but even more so because Modi has been projected by his party as a “strong man” in whose hands the country is safe, as a prominent defector from the Congress, Jyotiraditya Scindia, said recently while switching his loyalty to the BJP. The BJP’s overwhelming victory in last year’s general election was the result of the “surgical” strikes carried out by the Indian air force on terrorist camps in Pakistan. But, as a saffron scribe has conceded, such belligerence is not possible against the Chinese because of the possibility of the conflict spinning out of control. Yet, the BJP cannot allow the Chinese to keep pushing at the Indian forces on the LAC without losing face.

India has emerged as a Net Security Provider in INDO-Pacific,...