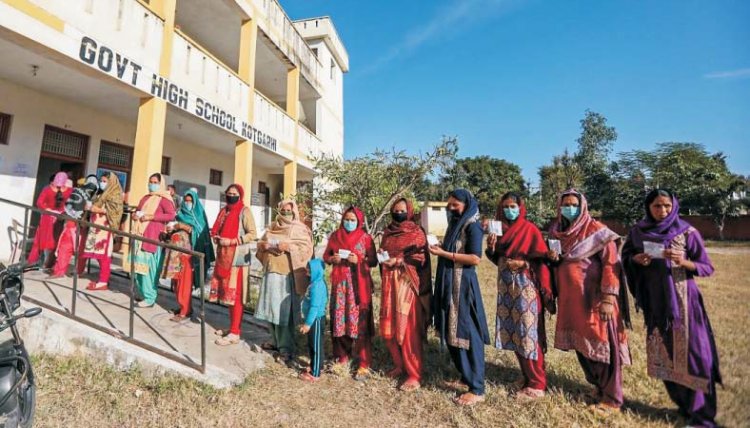 The district development council elections in Jammu and Kashmir mark the end of one chapter and the beginning of another. What they ring the curtains down on is the period since July 5 last year when parliament ended the state’s special constitutional status and turned it into a Union territory.

The order was followed by the stationing of half a million troops in Srinagar and other areas in the Kashmir valley, the detention of scores of political leaders and activists and the suspension, followed by the curtailment, of telecommunication services, including the internet.

What the elections were expected to indicate, therefore, was whether that peremptory step was acceptable to the people. The results, however, have sent a mixed signal. Of the 278 seats for which the contests were held, the BJP has won 74, thereby emerging as the largest single party with 28 per cent of the vote share.

The National Conference (NC) has followed with 67 seats (26.3 per cent) and the People’s Democratic Party (PDP) with 27 (20.6 per cent). The two are part of what has come to be known as the Gupkar alliance comprising several other parties which together won 110 seats. The alliance seeks the restoration of the special status. The Congress, which is outside the alliance but is against the BJP, won 26 seats (20.6 per cent).

Although the BJP claims on the basis of having emerged as the largest single party that the people have approved of the July 5, 2019, decision to do away with Article 370 of the Constitution which conferred the special status, it won 71 of its 74 seats in the Hindu-majority Jammu region, which is its stronghold, and only three in the Muslim-dominated Kashmir valley.

Evidently, the long-established divide between a Hindu Jammu and a Muslim valley (the Buddhist Ladakh region is now another Union territory) has been reaffirmed. However, the BJP’s three seats in the valley have brought the party much cheer since it regards them as a breakthrough in an area where it was always shunned and perhaps even more so after the scrapping of Article 370.

The party’s spokespersons also made much of the fact that an Independent candidate who supports the BJP won in Tral, which is associated with Burhan Wani, who was once the poster-boy of the Kashmir insurgency before he was gunned down by the security forces.

The BJP will also be pleased that the Apni Party won 12 seats. Critics refer to it as the “King’s party”, for its formation was facilitated by the BJP with the help of defectors from the PDP and other parties as the BJP tried to set up an alternative to established outfits like the NC and the PDP.

Meanwhile, the election of 50-odd Independents will infuse considerable diversity in the political scene as the Union territory tentatively tries to revive democracy in an area where high-handed official measures had partly replaced the earlier incidents of Pakistan-inspired terrorism along with the support lent to the jehadis by stone-pelting youths who targeted the security forces when they were engaged in anti-terrorist operations. However, the militancy hasn’t been totally eliminated because the jehadis continue to sneak in from across the border.

While the BJP is right in claiming that the latest round of polls signifies the victory of democracy, all eyes will be focussed, first, on how the development councils function under the newly-elected members and, secondly, on when the Election Commission will announce the dates of the assembly elections.

It remains to be seen how eager the centre will be on the assembly elections considering that the Gupkar alliance has bagged 14 of the 20 district councils. If the professional number-crunchers calculate that the Gupkar alliance’s 110 seats in the district council elections will translate into a majority or a near-majority in the 83-member J and K assembly – 46 seats in the valley and 37 in Jammu – then the BJP will be wary of a contest.

The BJP’s apprehensions will be based on the possibility of a ruling Gupkar alliance (in partnership with the Congress) seeking an invalidation of parliament’s decision to revoke Article 370. Such a negation of the parliamentary verdict may not be easy to achieve. But a demand to do so will put considerable pressure on the BJP.

The BJP’s only hope will be that the alliance begins to show signs of falling apart. There is little doubt that it is an opportunistic group comprising erstwhile rivals who have come together solely for the purpose of political survival. There are elements in it, such as the PDP’s Mehbooba Mufti, who is in the habit of shooting off her mouth as her recent observations about international arbitration in the Kashmir issue showed, who can queer the pitch for the alliance’s smooth functioning.

In contrast, the NC’s Omar Abdullah is more mature, having reiterated that he is waiting for the Supreme Court’s judgment. The same cannot be said of his father, Farooq Abdullah, who caused a minor storm by expressing the hope that the Kashmiris can turn to China for help.

The BJP, of course, has been quick to take advantage of these gaffes, including Mehbooba Mufti’s assertion that she will not raise the national tricolour unless it was hoisted along with Kashmir’s own flag, which has now become a part of history. It goes without saying  that there will be no let-up in the BJP’s attempts to portray the Gupkar alliance as a group of anti-nationals who have never been reconciled to being a part of India.

It is an argument which is in sync with the longstanding anti-Muslim outlook of the RSS and the BJP. It may be difficult to sustain their case in the light of the Gupkar alliance’s electoral success. But that does not mean that the BJP will refrain from making the effort.

Farmers and Government, Both Firm