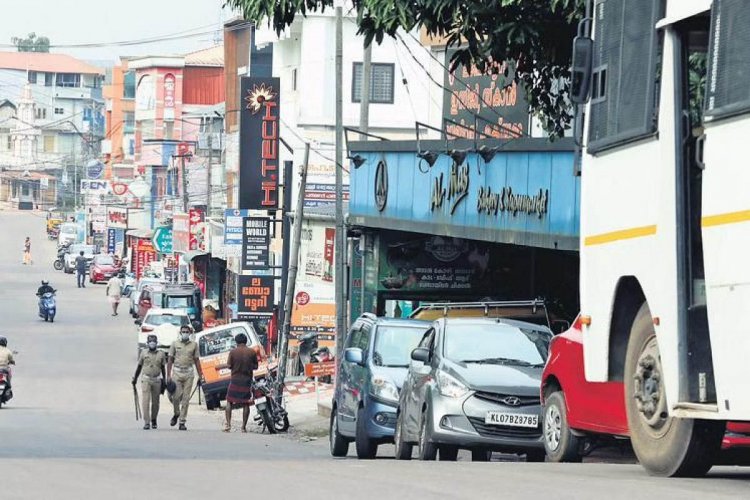 There’s a dismal pattern to the communal violence that erupted, across states, on the occasion of the Hindu festival of ‘Ram Navami’ last week. These were some of the shared features, writes The Indian Express.  “A religious procession, sometimes armed; provocative slogan and song; stone-pelting; viral videos, from both sides, that inflamed by what they showed and what they hid; delayed or inadequate or partisan police response; curfew. From Karauli in Rajasthan to Khargone in MP, from Khambhat and Himmatnagar in Gujarat to the Baina area of Vasco in Goa, from Howrah’s Shibpur in West Bengal to Lohardaga in Jharkhand — the anatomy of violence was similar. Violent conflict also broke out on campus in the capital’s Jawaharlal Nehru University between two groups of students, one alleging muscle-flexing over non-vegetarian food and the other blaming it on obstruction of a religious ritual. These incidents were reported from states ruled by the BJP as well as by the Congress, TMC and JMM.……”

Using bulldozers to raze houses  of people: There has also been criticism of the manner in which the riots have been handled. For example, in the wake of the Madhya Pradesh administration using bulldozers to raze houses  of people accused of pelting stones during a Hindu procession, Rajasthan Chief Minister Ashok Gehlot said even the Prime Minister did not have the right to demolish a person’s house without a probe. “Who has given you this right? Even the Chief Minister and Prime Minister don’t have this right to demolish somebody’s house without any investigation, without finding someone guilty. Imagine what the innocent people are going through.”

Incidentally, violent clashes have been reported from Rajasthan as well.

“Admittedly, conflict between majority and minority has not been created by the BJP — it has a longer life and several complicities. It is also true that in a shrill discourse saturated, and polluted, by social media images and posts, it’s easier to hurt than to heal.” And yet, concludes the paper for the BJP “it must now own its moment of reckoning….”

Building up on the same theme and stating that “fanaticism and religiosity go together,”  Tavleen Singh (former supporter turned critic of PM Modi) writes “it is difficult to say whether it has been the extreme religiosity of the past few years that has created this deluge of fanatics, or something else. Perhaps, they always existed in dark corners somewhere and have been emboldened to come out of the shadows because fanaticism has become fashionable in the ‘new’ India……

“Of course, we had our share of fanatics but usually these were people we treated with contempt and usually they remained hidden away in their own gloomy corners. They did not show up at public events……What is as worrying is that those who have become more fanatical in recent times justify their idiocy on the grounds that it is a valid and appropriate reaction to secularism. The secularism as practised by the Congress party was flawed, but the answer cannot be extreme religiosity…..”

The law on hate speeches

S Y Quraishi (former Chief Election Commissioner) wring hate speech. “There are a whole bunch of laws meant to curb hate speech. The Indian Penal Code, as per Sections 153A, 295A and 298, criminalises the promotion of enmity between different groups of people on grounds of religion and language, alongside acts that are prejudicial to maintaining communal harmony. Section 125 of the Representation of People Act deems that any person, in connection with the election, promoting feelings of enmity and hatred on grounds of religion and caste is punishable with imprisonment up to three years and fine or both. Section 505 criminalises multiple kinds of speech, including statements made with the intention of inducing, or which are likely to induce, fear or alarm to the public, instigating them towards public disorder; statements made with the intention of inciting, or which are likely to incite, class or community violence; and discriminatory statements that have the effect or the intention of promoting inter-community hatred. It covers incitement of violence against the state or another community, as well as promotion of class hatred.”

And “while examining the scope of hate speech laws in India, the Law Commission in its 267th report published in March 2017, recommended introduction of new provisions within the penal code that specifically punish incitement to violence in addition to the existing ones…….”

There is also the related question of civil liberties.  On this score,  India has scored 33 out of 60 and this formed the bases of it being categorised as “partly free”. This is how, writes  Aakar Patel (senior journalist and columnist) “democracies are rated and why we are constantly slipping.

According to Patel,  there is another  aspect to democracies, “and that is the functioning of the State. The engagement the most citizens have is not with the politician that they elected. It is with the bureaucrat and collector and the police officer and the judge that we have to deal with. For us, it is these people who are the State, and who are the ultimate representatives of the democracy.”

Unfortunately, their rating “would be quite bad. One part is obviously the corruption and inefficiency that we all have to live with. But there is something else, and it is the ability of the political establishment to bend the bureaucracy to their will. The police and the various agencies of the State are unleashed by the politicians in power on their opponents, and there is no resistance to this from within the system……

“It is bad enough that the State structurally does not allow us to exercise our rights and freedoms, as the global indices’ scores show. But it is even worse that within such a restrictive space, the apparatus of the bureaucracy has succumbed to the whims of those who are elected…….”

Afghanistan: India Getting Its Act Together

The BJP hopes that the New Cabinet will burnish its Image