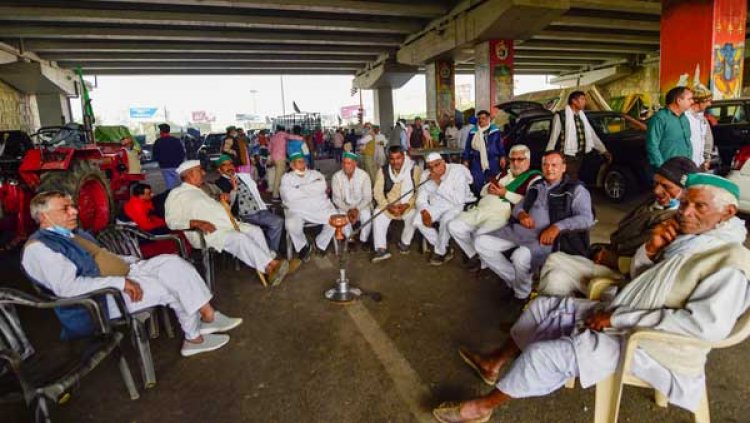 A bigger agitation than the earlier one against the citizenship issues is taking place on the borders of Delhi. Both involve minority groups. While the earlier agiation was by Muslims, the present one is by Sikhs although farmers from other states have also been voicing their support.

Their complaint is against the three recent agricultural laws which, they say, will put an end to the existing system and introduce a new one. Since the latest legal initiatives emphasize the opening up of the agricultural sector which till now has been largely under the control of the government and the farmers with the money lenders also playing a part, fears similar to those which were expressed when the Indian economy was liberalized in 1991 are being raised.

As in 1991, opinion is divided between those in favour of the entry of outsiders in the farm sector and those who want to retain the traditional norms of production and trade. Those in the first category argue that the new measures will free the farmers from the aegis of the mandis or traditional markets and restrictions on trade across the state borders, thereby enabling them to operate anywhere in the country.

The opponents of such liberalization suspect that the legal initiatives are the thin end of a wedge which will facilitate the entry of the corporate houses in the sector and pave the way for them to control farming in accordance with their market requirements.

The two industrial houses which are being mentioned are those of Ambani and Adani with the insinuation that the government is dancing to their tune. As has been pointed out, the Ambanis are already in the retail business of agricultural goods while the Adanis are setting up cold storages for their purchases of farm products. It is essentially the distrust of the farmers of the government’s intentions which is at the root of the current dispute which appears to have become bogged down despite several rounds of talks between the agitators and Union ministers.

As is inevitable during such prolonged tussles, impious motives are being attributed to the stakeholders with the government and the BJP alleging that the movement has been infiltrated by anti-social elmrents and the government’s critics repeating Congress leader Rahul Gandhi’s longstanding jibe of the government being a “suit-boot ki sarkar” or beholden to tycoons.

However, one of the worst charges that has been levelled against the agitators by the official side is that some of them are Khalistanis or supports of a separate Sikh state. Given the preponderance of Sikhs in the movement, the accusation was perhaps only to be expected. But it is in line with what the BJP used to say about the Muslim opponents of the citizenship initiatives, viz. that they were anti-nationals.

Not surprisingly, when one of the elderly women from among the Muslim agitators, Bilkis Bano, who has featured in the Time magazine’s list of 100 influencial people, wanted to go to the protest site of the Sikhs to express solidarity with them as a farmer’s daughter, she was detained. It is such  heavy-handed approach of the government which has hurt its reputation and made a hero of its opponents like Bilkis Bano.

That the government is extra-sensitive about the protests is  evident not only from Bilkis Bano’s detention, but also from its peremptory rejection of Canadian prime minister Justin Trudeau’s expression of sympathy for the farmers. Even if the prime minister was evidently playing to the gallery of the sizeable number of Sikhs who live in Canada, the Indian external affairs ministry’s term of “ill-informed” for Trudeau is similar to such appellations which were directed at critics of the Muslim demonstrators.

During the anti-Citizenship Amendment Act protests, the government showed a slight sign of softening when it announced that the implementation of the equally controversial National Register of Citizens, another sore point with the agitators, was not in the offing. But there are no indications of any major retreat with regard to the farmers at the moment unless the government gives a written assurance regarding continuance of the provision for a minimum support price. It is unlikely, however, that the farmers will be satisfied with only this concession considering that they want the scrapping of all the laws that have been proposed.

The morale of the farmers could not but have been boosted by the decision of a fair number of Arujana award winners who are prominent sportspersons to return their medals in support the agitation. Punjabi folk singers have also chipped in with their music. As one of them said, the reason for offering support was the anguish they felt when they saw the police charging elderly protesters with batons and firing water cannons despite the cold weather.

Up until now, the opposition politicians have stayed away as they mostly did during the protests of the Muslims. This show of restraint is helpful to the cause of farmers for it prevents the government from labelling them as tools in the hands of the government’s opponents. Expressing sympathy through tweets is a better means of standing by the farmers than addressing them at their protest sites.

It goes without saying that the farmers’ agitation is the biggest challenge which the government has faced till now. As a result of the disquiet within this community, who are called “annadata” or food givers, the government has lost one of its allies, the Akali Dal, from the coalition at the centre. Moreover, the Akali chief, Prakash Singh Badal, has returned his Padma Vibhushan award to the government.

The BJP had been complacent till now because of the palpable weakness of the opposition parties. But while the latter do not pose any threat, various communities – Muslims, Sikhs – are up in arms. Where the opposition has failed, the people have spoken up.