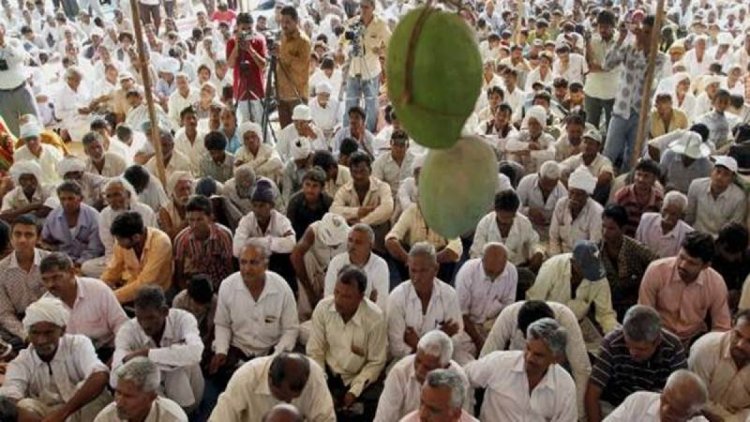 It was a tragedy waiting to happen. The prevalence of peace for as long as two months as the protesting farmers camped in thousands on Delhi’s border in support of their demands was a miracle. In a country where agitations are invariably volatile and unpredictable, the long quiet period was an exception which defied the  rule.

But it was too good to last. The moment they decided to enter the city, it was very much on the cards that the situation would go out of hand. And, so it happened. Anarchic conditions descended on the city as throngs of farmers took over the streets while the police were hopelessly outnumbered in most places.

The farmers’ movement against the three newly-enacted farm laws was virtually a leaderless enterprise any way with several organizations pretending to maintain a tenuous, untested control. But as the numbers swelled at the protest sites, the possibility of a breakdown of discipline increased.

But there was no one to counsel restraint. If the farmers had decided to stay put at the border, the pressure on the government would have been immense. As it is, the government had yielded ground by announcing a postponement of the implementation of the laws for a year and half. This was a remarkable retreat by an otherwise arrogant ruling party.

But, now, in the wake of the violence and that, too, on Republic Day which shocked the nation, the government and the BJP have gained the upper hand. The farmers have been discredited in the eyes of the nation and perhaps in their own eyes.

No attempt to pass the blame on to agents provocateurs – and there were apparently some – would deflect attention from the failure of the farmers’ leaders to assess what might happen if thousands entered Delhi. Moreover, the leaders were conspicuous by their absence when the mob ran amok.

It will be a herculean task for the farmers to retrieve lost ground. Already, their organizational structure has started falling apart even if one of their spokesmen has claimed that those walking out were peripheral to the cause. Moreover, if they gather again in Ghazipur on the U.P. border and elsewhere,  there may be further outbreaks of violence.

The government and the BJP cannot but breathe a sigh of relief. For the second time in just over a year, they have successfully staved off a challenge to their authority by groups of protesters. The first of these were the Muslims who organized sit-ins at public places against the citizenship laws. The farmers were the next.

Neither had a clearly defined leadership structure comprising individuals who  commanded respect and obedience. The agitations were based mostly on emotion. Although it generated sympathy and momentum, sentiments can only serve a cause up to a point. Beyond that, there is need for a hard-nosed recognition of reality and a careful formulation of tactics.

Such prudent preparations are needed all the more when facing a powerful administration. The Muslim protesters were fortunate that they did not experience the kind of ignominy suffered by the farmers since the Covid-19 outbreak led to their dispersal early last year. The farmers have no such excuse. They are the victims of their own foolhardiness.

What is more, their next course of action is uncertain. For one, nearly all their purported leaders will be tied up in litigation over their alleged role in the violence, leaving them little time to rebuild the movement. The charges include vandalism, attempt to murder and criminal conspiracy. Not surprisingly, their passports have been impounded.

For another, the government and the BJP will  intensify their propaganda about the agitation being led not by farmers but by the middle men and other “vested interests” who are afraid of being on the losing side when the reforms usher in a new method of doing business by establishing a direct link between the farmers and customers.

As it is, there is a section of the intelligentsia which has welcomed the new laws, seeing them as a break from the past and an example of the government’s pro-reform attitude. For them, what the government has been hesitant to undertake on the industrial front, it is doing in the agricultural sector.

They are critical, therefore, of the concessions which the government offered to the farmers during their 10 rounds of talks such as free electricity and no punishment for burning post-harvest stubble. They believe that while the first step will entail a reckless consumption of power by the tubewells, leading to the depletion of groundwater, the second will compound the problem of air pollution.

It remains to be seen whether this viewpoint is supported by the committee set up by the Supreme Court to pronounce on the new laws. The farmers had earlier rejected the committee on the grounds that its members were pro-reforms. Now, their voices have become feeble.

It is not only the farmers who will have to rethink their strategies, but also the opposition parties. Until now, they have been banking on  street protests, whether against the citizenship or the farm laws, to corner the government. Now, they, too, will have to return to the drawing board.

Their first move was to boycott the President’s address on the first day of Parliament’s budget session in “solidarity” with the farmers and in protest against the government’s “insensitive” attitude. That as many as 18 parties decide to stay away will boost their morale. But the government is unlikely to lose any sleep over the group which it will deride as yet another attempt to constitute a mahagathbandhan (grand alliance) which have proved unsuccessful in the past.

As the dust settles on the Republic Day’s mayhem in Delhi, which has been compared with the assault on Capitol Hill in Washington D.C. by right-wing extremists, politics can be said to be returning to normal in India with a weak opposition confronting a confident ruling party.

Bumpy Road to Peace in Afghanistan