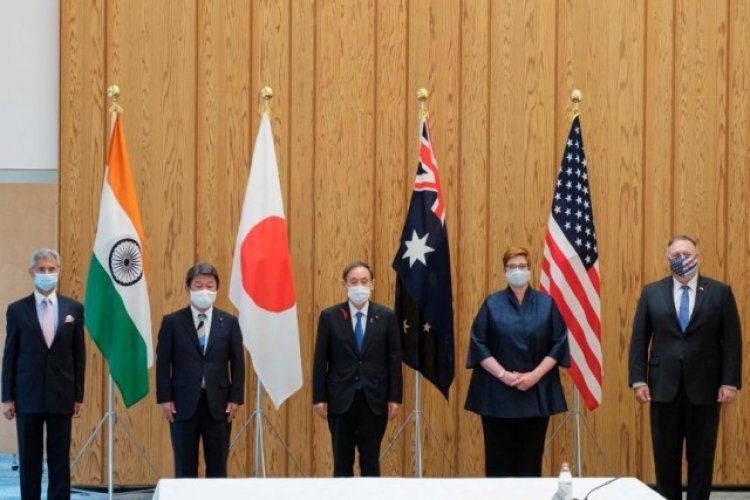 Alliances against a common foe have always been the best means of countering a threat and boosting self-confidence. The two world wars  provided the most notable examples of the unity of a group of nations against imperial and Nazi Germany, respectively.

In both the cases, the US played a key role, cementing its place as the most commanding nation on the world stage, a superpower as it is still called. Not surprisingly, the US is again playing a similar role. This time, its adversary is China, which resembles Germany of the last century in several crucial aspects, viz. its totalitarianism and an ambition to dominate the world.

Like the 20th century alliances, the present line-up against China comprises democracies, suggesting that it is not only China’s inordinate aspirations which have made these open societies come together, but also the threat which Chinese communism poses to their way of life with its focus on civil liberties.

Since there are four countries which have formally come together to confront China, the combine is called the Quad. Its members are the US, India, Japan and Australia. This is the first time that India has become a member of a group which is ostensibly directed at one particular country.

Earlier, India shied away from US-backed formations like the SEATO (South-East Asian Treaty Organization) in Asia – constituted on the lines of NATO (North Atlantic Treaty Organization) – whose main “enemy” was the Soviet Union during the cold war. Instead, India chose to be a part of the so-called non-aligned nations which steered clear of the two power blocs of the time, the US and the Soviet Union.

In this respect, India’s membership of the Quad represents a significant change in its attitude towards such tie-ups which are meant to deter a perceived opponent. The membership denotes another change, for this is also the first time that India has joined a pronouncedly Western group with a capitalist orientation.

Up until the signing of the India-US nuclear deal and beyond, India was wary of any proximity to  the capitalist bloc as it still carried the baggage of the period when the Soviet Union was hailed as a natural ally of the non-aligned group. A majority in the ruling Congress party, for instance, was uneasy about both the pro-market reforms of 1991 and the nuclear deal of 2008 as they brought India closer to the Western nations.

Australia, too, was regarded with misgivings, partly because of its “white” Australia  policy which kept out the “people of colour”  from the isolated landmass and also because of its allegiances to the British crown – the Union Jack is still a part of the Australian flag – and the US with its anti-Soviet Union and anti-communist military alliances. Australia’s racism was also further disfigured by its ill-treatment of the native aborigines.

Now, all that belong to an unwanted past. Australia today is a vastly different country from what it used to be. It is embracing colour-neutral multiculturalism, is a destination for Indian students and considers itself closer to Asia than to Europe. Largely because of the cricketing connection, Indians look upon Australians and their cricketers with warmth.

But, it is also undeniable that the present bonhomie would have been much less if China wasn’t such a menace. It is this threat which has made the bond of Quad all the stronger. In fact, it is not impossible that in course of time, Quad will become Quad-plus three by accepting the membership of Vietnam, the Philippines and perhaps even Taiwan, the three countries which are feeling the Dragon’s fiery breath on their necks.

Arguably, for all of China’s muscle-flexing on India’s northern border, it will probably be Taiwan which will experience the first full-scale military assault by China. There are two reasons for this. One is that China may have realized by now that India is not quite the pushover that it thought with 1962 in mind. As a result, it will be foolhardy of China even to start a limited war lest it should lead to a wider conflagration which it cannot control.

The other reason why China may target Taiwan is that Beijing today is like a debutante who is all dressed up and nowhere to go. With all of its military hardware, China does not have a war on its hands, making it look rather foolish like an over-muscled man who can only preen in front of the mirror. A cocky Taiwan with its ethnic Chinese practising democracy makes China look all the more silly.

But attacking Taiwan carries the danger of China coming into direct conflict with the US. It will be like a rerun of the Japanese attack on Pearl Harbour which made the US enter World War II. It will also be the Quad’s first test. Can it remain only an alliance on paper or experience the heat of battle ?

The Quad at the moment is the international community’s first line of defence against Chinese expansionism. So far it believes that it is acting as a deterrent to warn China against adventurism. Most people will hope that its role remains confined only to cautioning China and not engaging in a shooting war.

Since the focus of all the Quad’s constituents is on reviving their economies after the ravages of the coronavirus pandemic, they will be loathe to fight a war which cannot but inflict devastation all around. Such an outlook is natural to all democracies with their emphasis on life, liberty and the pursuit of happiness. But dictatorships which have no time for the ordinary people tend to follow a nihilistic logic of their own.