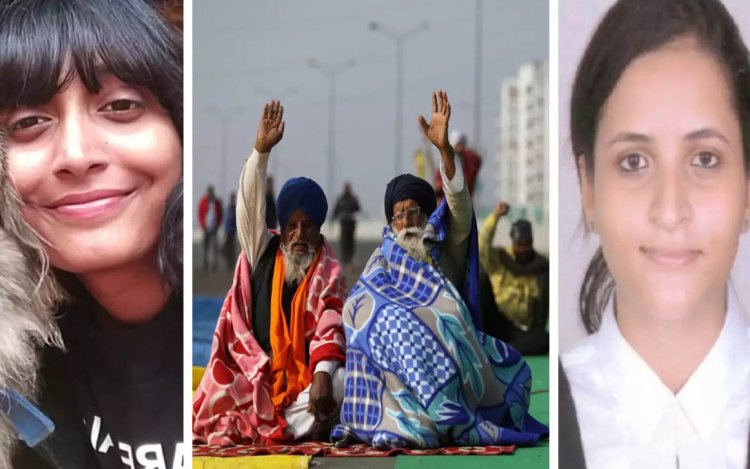 The arrest of a young climate activist, Disha Ravi by Delhi police, has created a storm. She is accused of manicuring the foreign hand stirring up trouble against the government of India — specifically of having edited a so-called toolkit, a document supporting the farmers’ agitation and ways to mobilise support for it, through online campaigns addressing the government of India and, for those living outside India, local governments.

Climate activist Greta Thunberg had shared the "toolkit" to lend her support to the farmers' agitation against the three new farm laws. In the document, various urgent actions, including creating a Twitter storm and protesting outside Indian embassies, were listed to rally support for the farmers. But the "toolkit" has been cited by some critics as "proof" of a conspiracy to fuel protests in India.

Delhi Police claimed that Disha Ravi was an editor of the "toolkit Google doc" and the "key conspirator" in the document's formulation and dissemination. Delhi police has maintained that "all due procedures were followed" in her arrest.

Charges on her include sedition, promoting enmity and criminal conspiracy. “There is a call for economic warfare against India and certain Indian companies. Their assets in India and outside are to be made targets for physical as well as coordinated actions," reads the FIR (First Information Report). It also says that the January 26 violence was part of a “pre-planned conspiracy”.

“There is also a call to protest specifically outside Indian Embassies and target symbols linked to Indian culture such as Yoga and Chai,” reads the FIR.

It said that the rally “which was initially agreed to by the farmers’ unions as a peaceful march, turned violent” as “a result of the said instigation by elements behind this document and its toolkit”.

The police Cyber Cell also blamed the “secessionist banned organisation, Sikhs for Justice, based in the United States of America” as having contributed to the violence on January 26, saying it had “declared a reward of USD 2,50,000 for waving secessionist flag at the India Gate on Republic Day”.

It also noted that the toolkit was “promoting” campaign material by Poetic Justice Foundation, “a Canada based organisation that openly and deliberately shares posts on social media that tend to create disharmony or feelings of enmity, hatred or ill-will between different religious, racial, language or regional groups or castes or communities”.

It also said that the documents in the toolkit “specifically mention targeting certain regions of India to instigate enmity and divide” and “detailed plans have been made by conspirators to instigate certain communities against one another”.

Significantly, protesting farmers have extended their support to the 21-year-old environmental activist. The Samyukta Kisan Morcha (SKM), which is leading the agitation against new agri laws, demanded the release of Disha and said that the Centre is brazenly misusing power to suppress the farmers' movement.

However, Internet Freedom Foundation Executive Director Apar Gupta (who was one of the members of the Save the Internet campaign conducted some years ago on the issue of net neutrality), cautions toolkits can also be used to spread disinformation and thus it is incumbent on a reader to be mindful of whether the toolkit is seeking participation in constitutional objectives.

Amidst the controversy, The Hindu notes “while keeping up the pressure on Twitter by threatening to take action, the government, at least for the time being, seems to have stopped short of taking action. And while being defiant initially, Twitter also seems to have stopped short of escalating it and going to court. This is significant because if either one of the parties had decided to escalate the issue, the contentious law under which social media platforms are required to comply with blocking orders could come under legal scrutiny. The reference is to Section 69A of the Information Technology Act, 2000, under which the government can order a digital intermediary to block any content on grounds including security of the state and public order……….This Section, in a way, represents the wide censorship powers that the government has. It is, therefore, important that freedom of speech is not seen as the antithesis of security of the state, but as one of its key facilitators.”

This is technological illiteracy

T K Arun, ET journalist  writes Ravi’s  arrest “is technological illiteracy and disregard for the interconnectedness of the modern world at one level and wholly undemocratic silencing of dissent, on the other.  Social media, by its very nature, can be both local and global. India has a large diaspora spread out across the world, with sizeable populations in some countries such as the UK, Canada and the US……

“The farmers are demanding repeal of the laws, not downfall of the Indian state. Yes, the Khalistani outfit, Sikhs for Justice, has chosen to tag along with the agitation to gain support among the agitating farmers…” But this  does not make the farmers’ agitation a Khalistani conspiracy.

Imagining a ‘global conspiracy where none exists’

There is little doubt, writes The Hindu “that it is not organised protests, online or offline activism in support of the ongoing farmers’ protests against the controversial agricultural laws, or the mobilisation of public opinion against government policy, that is adversely affecting the country’s reputation and prestige. The regime is more likely to attract international embarrassment and opprobrium by the indiscriminate use of police power against activists, protesters and the media. The state is increasingly resorting to heavy-handed responses to issues that attract a convergence of activism, opposition political activity and adverse media scrutiny. In particular, the farmers’ protests, and the violent turn that it took on Republic Day due to some deviant elements, have led the present regime to imagine a global conspiracy where none exists. A government truly worried about its global image would instead seek to address the deficit in tolerance and surfeit in repression that are becoming more obvious with each passing day…..

“Surely India’s democracy cannot be so thin-skinned about international interface, so paranoid, ’70s-style, about the ‘foreign hand’. In an open democracy, the power of a government lies not in creating an obedient and pliant citizenry by criminalising the protester, but in extending and enlivening the public sphere….”

An editorial in the Hindustan Times says “Ms Ravi’s arrest throws up three issues. The first is the role of the State. The government has decided to politically invest in a narrative of a global foreign conspiracy against India, of which the ‘toolkit’ is evidence. But the evidence to suggest such a conspiracy is limited. Despite its objectionable characterisation of the Indian State in parts, did the ‘toolkit’……..really lead to the violence on January 26? Is there direct evidence? At a time when India is facing criticism for growing illiberalism, is arresting young activists the most ethical or prudent course of action? How does it sync with India’s constitutional guarantees on free speech and political activity?

Role of the judiciary: “The second is the role of the judiciary. The metropolitan magistrate’s decision to remand Ms Ravi to custody, without her private counsel being present, without questions about the process of her arrest, and without adequate scrutiny of the charges and evidence, does not reflect well……..And finally, there is the role of activists themselves. Dissent is indeed a right…..But often, activists end up getting used in larger political games. The fact that pro-Khalistan groups are actively seeking to leverage the current farm protests is not a secret, which makes it even more important for civil society to maintain its distinct identity and position on the issue.”

The Tribune agrees that the role of the judiciary is questionable. “The proceedings before a Duty Magistrate in New Delhi in this case have exposed procedural loopholes that go against the rule of law — considered to be a sine qua non in a democracy. Allegations are that the 22-year-old woman was not represented by a counsel of her choice at the time of the hearing. If true, it’s a serious procedural lapse. Ideally, she should have been allowed to have her own counsel. Article 22 of the Constitution insists that no person who is arrested shall be denied the right to consult and to be defended by a legal practitioner of his or her choice……”

Finally, the role of the Ministry of External Affairs (MEA) on the tweets by international pop singer Rihana and climate activist Greta Thunberg, has come under the scanner, inside and outside Parliament. It decried “celebrities and others”, and denigrated them as being “neither accurate nor responsible”. The Minister for External Affairs has tweeted about “motivated campaigns” targeting India which “will never succeed” and said that: “We have the self-confidence today to hold our own”.

Commenting about the association of celebrities with public protest, Upendra Baxi (professor of law, University of Warwick, and former vice-chancellor of Universities of South Gujarat and Delhi) writes that “celebrity activism is now a long tradition the world over of human rights activism. It is for the MEA to decide how foreign policy is best conducted but Twitter diplomacy is new to India.

“The world of celebrities — actors, sports heroes, prominent authors, media personalities, global public citizens, recipients of Nobel Prize and the alternate Nobel prize, such as the Magsaysay Award — is firmly entrenched in international relations. It has helped the growth of global civil society opinion and action………

“Governments and political parties also seek to convey their messages to the masses through their chosen celebrities: Many are nominated to Rajya Sabha, and some receive national honours…….The United Nations has deployed celebrities in various roles like ‘goodwill ambassadors’…..”

Thus, while there exists a growing public trust in the image of the ‘celebrity-as-rescuer-of-victim’, “celebrity activism becomes pernicious when it offers band-aid solutions and capsule knowledge, which tends to glamourise populist policies rife with unintended consequences.”

Nevertheless, MEA’s observation about the Indian ‘democratic ethos and polity’, concludes Baxi  “is indeed high-minded but its global pedagogic role and reach has to extend beyond majoritarian representation to the ‘miniscule’ which dissents from the ‘multitude’. It should refer, beyond governance and development, to the wider constitutional ethos which the apex court has re-articulated as a ‘constitutional renaissance’ and ‘constitutional trust’.”