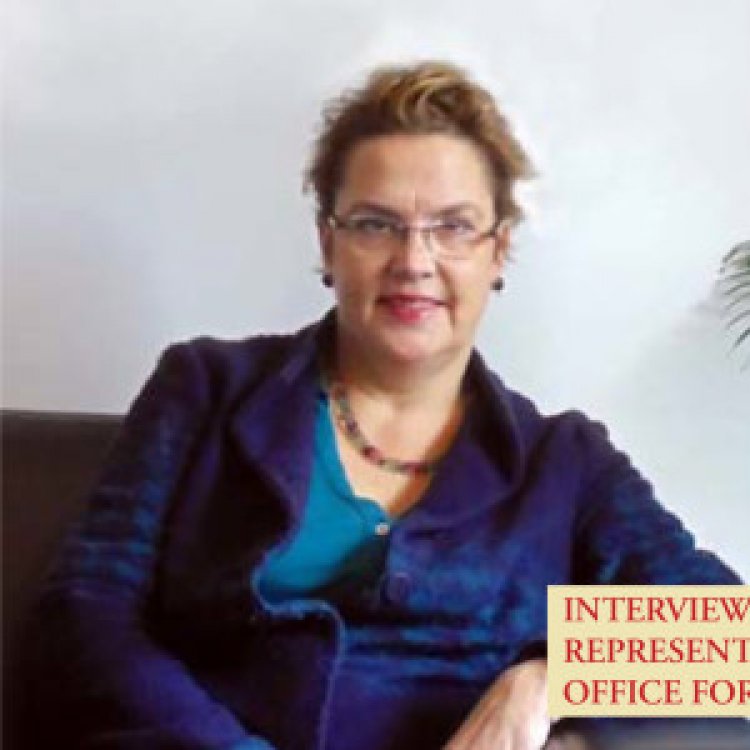 Ms Cristina Albertin has been the Representative of the Regional Office of the UNODC (United Nations office on Drugs and Crime) for more than six years. Asia News Agency, in a Face to Face interview, sought her views on current issues relating to crime and drugs. Some excerpts of the interview are produced below

ANA: Thank you very much Excellency for agreeing to share with us your experience and knowledge of issues that are of great significance to mankind. Could you, for the benefit of our readers, explain the mandate of the United Nations Office on Drugs and Crime (UNODC)?

Her.Exc: The work of the United Nations Office on Drugs and Crime is enshrined in several United Nations Conventions related to drug control, crime prevention, countering corruption and preventing terrorism 1as well as in internationally adopted standards regarding the criminal justice system. It is important to understand that the above
Conventions are holistic and comprehensive in their approach looking at penalization and law enforcement aspects of crimes, but also at the need for prevention, the support to the rights and rehabilitation of victims of crime as well as at the health implications of drug use. They are grounded in the respect of the rule of law and human rights. Countries that have ratified them commit to fully implement the Conventions and UNODC can provide technical assistance as required.

ANA: Excellency, in your opinion what are the key elements of the crime scenario of the South Asia region?

Her.Exc: I think the crime scenario is greatly changing as more organized crime is being involved and crimes happen across borders within and across the region. Crimes have become more complex and this poses a real challenge to those who have to investigate it. Some decades ago, a policeman had to investigate a homicide or a burglary, today if you investigate a drug seizure, there will be a whole criminal network behind and maybe across the world and other crimes will be attached to the drug trafficking offence, such as money-laundering, commitment or abetment of an organzed crime group and maybe even terror-funding. For the criminal justice systems, this poses enormous challenges in keeping up with investigative methods, including in the cyberspace and producing the right evidence that is admissable in the courts. Also, prosecutors and judges need to be constantly trained and build capacities to deal with new and more complex crimes. Finally, combating transnational organized crime effectively also requires that States work together on information and intelligence sharing as well as on mutual legal assistance for cooperation in criminal matters.

ANA: Excellency, there is a perception that countries like India are unsafe particularly for women. You have worked in many parts of the world. Would you agree with the perception?

Her.Exc: India is definitely not the only unsafe place in the world for women. Patterns, forms and extent of violence against women may vary across societies and we do not always have the best data to corroborate this situation. As you say, it has a lot to do with perception, which for the India context in the last years has been very much fed and shaped by the Nirbhaya case and the more prominent reporting in the media of very brutal gang-rape cases, including of minor girls. Although the Nirbhaya case has attracted much public attention over the years, there is a lot of hard work to do in the society to change the mindset which puts too often the woman at fault and not the perpetrator when it comes to rape or other forms of violence, such as domestic violence or dowry killings. Also, the criminal justice response has to be faster and effective so that survivors receive compensation and legal aid, offenders are properly sentenced and treated and the public can trust the system. Let me also say, during my time here, I personally have not experienced moments of unsafety in the understanding that I took precautions and followed security recommendations as I would do in any large city, especially when not speaking the language. In general, I believe the situation for a foreign woman in my position will always be different from the one of a local women and that has favoured me.

ANA: It is understood that drug dependence has become major problem in some countries of the region. Is there an estimate of the extent of the problem? And what are main drugs of choice?

Her.Exc: Drug markets have evolved considerably over the last decades. Today, there is a myriad of drugs available in the market ranging from cannabis, heroin, amphetamine-like synthetic drugs (for example, ecstacy or “yaba”) to cocaine . In addition, prescription drugs containing narcotic or psychotropic substances are easily available without prescripton in countries that have large pharmaceutical industries such as India, something that should not happen. There is a great need for the enforcement of regulations at pharmacy level, for nation- and statewide preventive plans and for better access to and coverage of drug use treatment services. It is important to understand that drug dependence is a long-term, relapsing medical disorder that can be treated, that States have an obligation to provide these health services and those who require the treatment have a right to it. Regarding data, in some countries of the region, such as Bhutan and Maldives, there are recent nationwide studies on the extent of drug use. In India the last national drug use survey was done in 2001. It is time that a new survey is conducted including all drugs being used among specific population groups. It would also be good, if states could start to do their own surveys as respective policies would have to be shaped at local level.

ANA: Excellency, in the 6 years that you have been in the region, in which key areas has the UNODC made an impact?

Her.Exc: I do hope that we made an impact! I consider one of the greatest achievement that after 2011 almost all South Asian countries had ratified the UNTOC and the UNCAC. This was not the case when I arrived in 2009 and I put the ratification as a top priority on my agenda with individual Governments for one reason: the ratification of international conventions presents a great opportunity and the Conventions themselves are a platform to address transnational organized crime and corruption in a holistic way from penalization to law enforcement and proescution of the offence and related crimes, such as money-laundering to the prevention of the crime and the protection and restitution of right of the victims and survivors. In this conetext, I think one major achievement I am proud of has been the promotion of regional cooperation in criminal matters, incl. terrorism, which is now leading to the establishment of a regional platform of intelligence sharing within the region and the networking of such platforms worldwide. This will lead to enhanced global cooperation when it comes to investigating and prosecuting crimes across borders. In this context, I should not miss to mention the many studies and assessments we have supported to highlight the needs of vulnerable
groups such as injecting drug users and human trafficking survivors. I see a gradual change in mindsets of Government officials across Ministries and parliamentarians in dealing with these issues and I trust that this will lead to policy changes in the long term. Consdering the size of India, we have introduced eLearning in drug law enforcement as an alternative to classroom teaching. This approach has been another valuable contribution which has been acknowledged across the region.

ANA: What have been the challenges that you have had to overcome in the course of your work?

Her.Exc: Definitely, there have been many challenges that we had to overcome. Since UNODC deals with very ensitive issues, Governments are concerned about the possible implications of the work we offer. Working in the area of anti-corruption means to acknowledge that there is a problem that needs addressing This has not always been easy. In general I can say that in the region there has been a great openness to deal with especially drug use problems. All six countries in which I worked (Bangaldesh, Bhutan, India, Maldives, Nepal and Sri Lanka) have openly discussed with us the existing drug use problem and the concerns they have for the future of their country: Drug use among youth has often been singled out as the most important problem, more important than terrorism and corruption in the context of the work UNODC can do. Having said this, the lack of funding by external partners or by Governments themselves to act on these issues has been one of the major obstacles and I truly regret that we were not able to do more because of the mere lack of funds.

ANA: Looking ahead, which are the emerging threats for countries in the region in respect to crime and drugs?

Her.Exc: All six countries that I worked for, face a myriad of forms of organized crime – in a varying degree- incl. drug trafficking, human trafficking, people smuggling, arms trafficking, wildlife crimes, trafficking of illegal or counterfeit products, incl. fake currency and related crimes, money-laundering, corruption and terror funding. I think the current imminent challenges lie in how to contain and control a possible expansion of terrorist networks within the region as well as how to prevent that the large numbers of South Asians who look for better lives within India and in other regions end up being trappend and brutally exploited by smuggling or trafficking networks without any resort. The large number of vulnerable people in South Asia which presents a fifth of the world population can easily fall prey to ruth- and
merciless smugglers and traffickers and it is urgent that Governments take action to prevent this.

ANA: Excellency, could you give us your personal experience – good and bad – having been in the region for so many years.

Her.Exc: Being in a new region, can only entail good experience because of what one learns: after having only talked about my work sofar, I would like to say that I have truly enjoyed my stay in the region with its very colourful liveliness and diversity. I have travelled a lot both privately and for work and I have been very impressed by the cultural diversity, the adapation to change and the resilience of its people. There are so many aspects to it, I have probably mostly enjoyed the learning about the variety of faiths and religions, the literature, the craftmanship in all its different manifestations and beauties and especially the amazing variety of textiles and jewellries. I take a lot of images ( and mementos) of South Asia and India with me- it was just an ovrwhelmingly amazing experinence that I could never have had imagined before my arrival and I am not yet sure how it will influence me once I have moved to my new destination.