Two Views: India’s Interests LIE With Russia or the West? 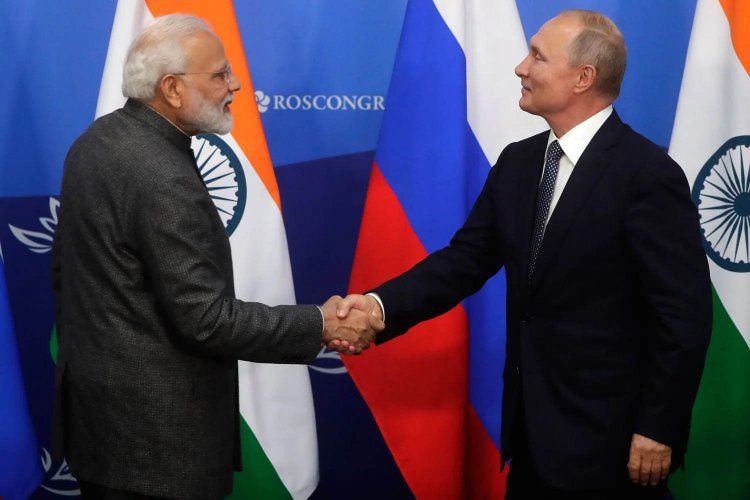 India is in high demand in Biden’s circuit. After the G7, Biden is travelling to West Asia in July, where he, reportedly, plans to form a new quadrilateral called ‘I2-U2’ to prop up the moribund Arab-Israeli axis against Iran, in which, strangely enough, he has included India, a civilisational ally of Iran.

India in demand: US not finding enough support for sanctions

Indian policy makers, writes MK Bhadrakumar (former Ambassador) “claim that it testifies to India’s presence at the high table in world politics. A more plausible explanation could be that Washington is not taking its eyes off India, which it considers to be a fence sitter on Ukraine. These are epochal times. The world of yesterday is drifting away. Biden is acutely conscious of the beating that American prestige has taken in recent years. He chaired two summits in the White House recently to press his case against Russia — with countries of ASEAN and the Organisation of American States. Both ended inconclusively. The non-western world is overwhelmingly refusing to sanction Russia, Washington’s entreaties notwithstanding.”

Even at the recent “EU summit, there was little or no discussion of a seventh package of sanctions, as leaders confronted the reality that punitive measures so far have had little deterrent effect on Russia, despite the heavy cost to European economies.”

Russia is the most natural partnership across Eurasia: a view

From the Indian perspective, argues Bhadrakumar “what is pertinent would be that there is a profound awakening in Russia about the futility of casting its identity in European categories….” If this. Be the case, Bhadrakumar argues that India’s interests lie with Russia rather than US.

“Indian analysts with a zero-sum mindset misinterpret the unusual character of the Russia-China partnership. Russia is endowed with scientific brilliance, technological prowess, abundant energy, rich rare minerals and metals — and global warming will increase the agricultural potential of Siberia. If Russia combines with India’s resources, vast market and manpower, it becomes the most natural partnership across Eurasia……

"India should also know that what the so-called liberal internationalists promote is effectively a Cold War strategy with a few more non-white countries added to the mix. India shouldn’t be living in the reveries of the ‘American Century’, which is over…..”

India’s interests do not lie  with Russia: a contrary view

Subir Bhaumik (former BBC correspondent) argues that India’s interests do not lie with either Russia or the West.

If ‘India first’ has to become the signature tune of the country’s foreign policy, Bhaumik argues “then the Narendra Modi government has no reason to play easy with either Vladimir Putin’s Russia or the West, especially the United States of America and the United Kingdom. Putin’s war in Ukraine has been counter-productive not only for Russia but also for its friends like India. The Russian army may be close to securing the Donbas region but the losses it has suffered militarily and economically would make even Putin’s closest supporters wonder if the war is really worth it.  Instead of dividing the West over NATO, it has re-energised the US-led military alliance, with  neutral nations like Finland and Sweden pushing to join it. For India, the  Ukraine war and its possible escalation have led to unprecedented import prices on energy and edible oils. It also means substantial disruptions to Russian nuclear energy projects like that in Kudankulam, joint development of military platforms, and spare part supplies for existing Russian military equipment. So Modi has very good reasons to tell ‘friend’ Putin that continuing the war is not acceptable for India.”

India should also oppose the West: a contrary view

Bhaumik argues “India also has valid reasons to oppose the West. “The war in Ukraine works fine for the US. It has created a new fervour in Europe for an expanded NATO  as smaller east European nations begin to dread the hungry Russian bear.

“But for India, the longer the war drags on, not only does it undermine economic recovery but it also creates serious strategic challenges — a weakened Russia entering China’s embrace. India thus has good reasons to tell the West that its ‘weaken Russia’ agenda works to China’s advantage and is against India’s strategic interests. No amount of American assurances to stand by India in the event of a conflict with China can assuage Delhi, especially if the Ukrainian example is anything to go by. India is in Quad but not in NATO — so the US has no compulsion of joining a war against China if it attacks India. Weapons and real-time intelligence are the most that India, like Ukraine, can expect.”

Get Russia on the negotiating table: The foreign minister, S. Jaishankar, and the UN representative, T.S. Tirumurti, have done a great job talking back to Western leaders seeking to pull up India for not jumping on to the anti-Putin bandwagon. But,  “it is time for India to do more. India has to save the world from Cold War 2.0. But in pursuit of its national interests and those of other developing nations, New Delhi has to get out of its defensive mindset of merely defending its abstentions in voting on UN resolutions aimed at Russia. It has to make a strong effort to get Russia and Ukraine on the table and talk peace…..”