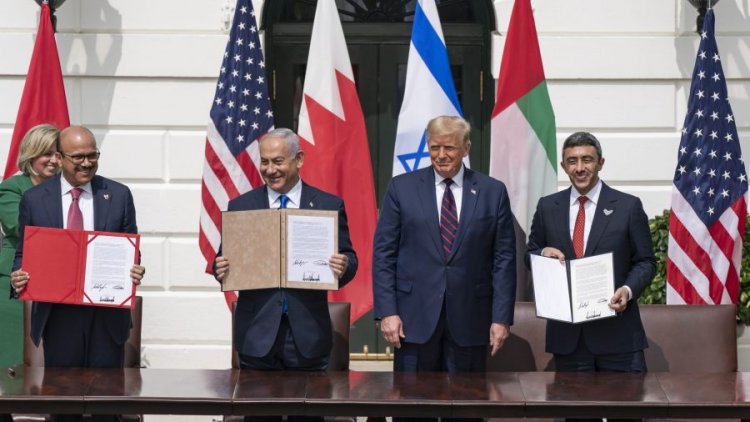 The Abraham Accords, signed US Tuesday by the UAE, Bahrain and Israel, mark a new beginning in the relations between the Sunni-ruled Gulf kingdoms and the Jewish state. Under the agreement, the UAE and Bahrain would normalise ties with Israel, heralding better economic, political and security engagement. More Arab countries are expected to follow suit, say U.S. and Israeli officials. The agreements have the backing of Saudi Arabia, arguably the most influential Arab power and a close ally of the UAE and Bahrain.

Though of historical and geopolitical significance, The Hindu writes “it is too early to say whether the accords will have any meaningful impact on West Asia’s myriad conflicts.” First, unlike Egypt and Jordan, “the Gulf countries are not frontline states in the Arab-Israeli conflict…….Second, the agreements leave the Palestinian question largely unaddressed…….” And significantly, “the vacuum left by the retreat of the Arab powers from the Israel-Palestine conflict is being filled by the non-Arab Muslim powers — Iran, Turkey and their allies……With the U.S. in retreat and Turkey and Iran pursuing more aggressive foreign policies, there is a three-way contest taking shape, in which Sunni-ruled Arab kingdoms, all American allies, are realigning their geopolitical interests with Israel. The Abraham Accords are likely to sharpen this contest……..”

In the view of Ron Malka, Israel’s ambassador to India, the Abraham Accord “brings opportunities for India, which enjoys strong bilateral relations with these developed and thriving economies. India will benefit greatly by expanding its cooperation in many areas including health care, energy, agriculture, cyber security, regional security, technology, water and more.

“……..For example, the health ministers of both Israel and the UAE have already agreed to cooperate on health issues, particularly on the coronavirus. Meanwhile, Israel and India have also been cooperating on joint research and development for rapid testing of Covid-19, as
well as new technologies to combat the pandemic………

“Like India, Israel and the UAE are young countries that have managed to develop dynamic, thriving economies in a few decades………Given that both countries are strategic partners of India, we can imagine the promising potential that is embedded in this exciting peace agreement.”

Basically, “this historic peace agreement opens a new era of peace and prosperity for the whole of West Asia, India, and the world.”

India needs to reconsider its stance to Afghanistan and Middle East

For India, the Abraham Accords and the peace talks in Afghanistan, impinge on its future security environment that already looks troublesome.

Although the peace accords may not necessarily lead to broader peace, C Raja Mohan (director, Institute of South Asian Studies, National University of Singapore and contributing editor on international affairs for The Indian Express) writes India needs to rethink its position.

“First is the strategic nature of the two sets of developments. Given the difficulty of reconciling the competing interests in Afghanistan and the Middle East, both the peace processes remain quite vulnerable. But the unfolding dynamic will alter the geopolitical landscape in both places. Whether peace breaks out in Afghanistan or not, the Taliban is here to stay….

“Second is Arabia’s enduring importance for the Subcontinent’s geopolitics. India’s strategic community tends to take too narrow a view of the Arabian salience; the focus is mostly on ensuring oil supplies, promoting manpower exports, and limiting the region’s impact on India’s Pakistan problem. But there is more to the Gulf.”

For example, the Afghan peace talks are taking place in Qatar notwithstanding the fact that the Gulf Arabs played a key role in the 1980s defeating the Soviet occupation of Afghanistan. “The UAE and Saudi Arabia were the only countries to recognise the Taliban government in the late 1990s. This time around, they appear to have taken a backseat. But they will not forever cede the lead in Afghanistan to their Gulf rival, Qatar.”

Delhi will thus “need to pay more attention to the unfolding realignments in the Middle East, especially between the Arabs and non-Arab states like Iran, Turkey and Israel…..

“Third is the paradox of American power. Trump’s moves in Afghanistan and the Middle East are widely seen as part of the inevitable decline of US power. But the reality remains that the US is the one forcing change in both the theatres…….it was the US political and diplomatic weight that facilitated the formal dialogue between Kabul and the Taliban. In the Middle East, it is the US that has led the efforts for a reconciliation between Israel and Gulf Arabs.

“Fourth, as the US steps back from the region, at least for now, the resulting strategic vacuum is likely to be filled by other powers…….China’s future role in Afghanistan, in partnership with Pakistan, could be quite significant and will be of some concern for India.

“But the Greater Middle East is no longer the exclusive preserve of great powers. Regional powers have already acquired much say in the new geopolitics of the Middle East. If Qatar and UAE punch way above their weight, Iran, Saudi Arabia, and Turkey are locked in a major contest for regional influence. All of them are involved in the proxy wars in other countries. Meanwhile, Egypt and Iraq are trying to regain their once privileged places in the regional hierarchy.

“Finally, domestic turbulence in most countries is intensifying. Religious radicalism, sectarian and ethnic divisions, and the clamour for more representative governments are sharpening conflicts within and between countries. The collapse of the oil market is undermining the region’s economic fortunes and making it harder for political elites to address the emerging political challenges.”

In the above scenario “India’s framework of non-involvement, however, is unlikely to survive the present wave of structural change in Afghanistan and Arabia. As the old order begins to crumble in the greater Middle East, the question is no longer whether India should join the geopolitical jousting there…….”