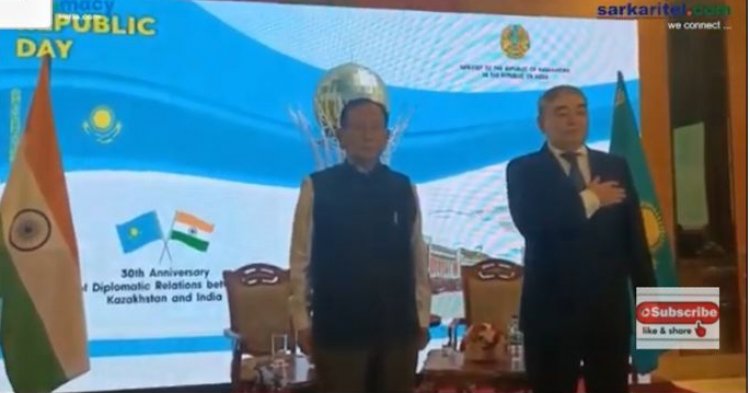 On 10 November, 2022, Kazakhstan celebrated its  Republic Day and also 30 years of establishment of diplomatic relations between India and Kazakhstan. Enovys of Foreign Missions based in New Delhi, former Indian Diplomats, Business persons and Media attended the Republic Day Reception at Kazakhstan’s embassy.

India was one of the first countries to recognize the independence of Kazakhstan in the year 1991 followed by the establishment of diplomatic relations between both countries in the year 1992.

Speaking on the occasion, Kazakhstan’s ambassador to India Nurlan Zhalgasbayev underscored that both the countries are enjoying strong economic cooperation while  highlighting cooperation in trade. "Today we celebrate the Republic day of Kazakhstan and also the establishment of the diplomatic relationship between India and Kazakhstan. Over these 30 years, we established strong, political dialogue between our leaders and also we are enjoying very strong economic cooperation between the two countries. Last year, we reached the volume of 2 billion US Dollars of trade turnover and this year we hope we will manage to increase this volume", said the envoy.

Early Presidential elections: Kazakhstan will have early Presidential Elections  on the 20th of November. Ambassador Zhalgasbayev said whoever comes to power, the relationship between Kazakhstan and India will remain the same. "Next year, we expect the President of Kazakhstan will visit India. During his stay here in India, we are planning to arrange some business forums and also meetings in various spheres like mining, transportation, logistics, pharmaceuticals and others,” he said.

Electoral reforms: While signing a decree for holding early elections, the President of Kazakhstan Kassym- Jomart Tokayev, had outlined the recent reforms and transformations in Kazakhstan which included the establishment of the Constitutional Court, a 'none of the above' option on ballot papers for all elections, a 30 per cent quota for Women and young people in pre-election party lists, etc.

Facilitating international trade in domestic currency is a good idea, but with limitations

Two Views: India’s Interests LIE With Russia or the West?