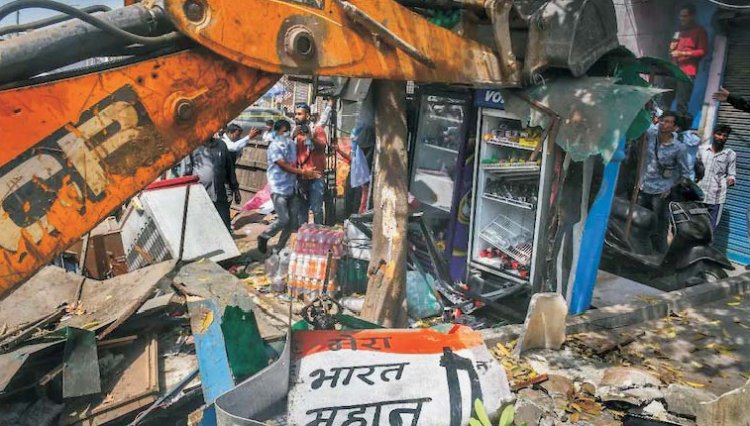 Tension and clashes have taken place this month in Rajasthan, Madhya Pradesh, Gujarat, Jharkhand, West Bengal, Uttarakhand and Delhi. Beyond the Hindi belt and Gujarat, BJP-ruled Karnataka — where elections are due in just a year from now — is in a state of perpetual polarisation.

The so-called “bulldozer policy”, first applied in BJP-ruled Uttar Pradesh, is worrying, writes Saba Naqvi (senior journalist).  In Delhi, the BJP-run municipal corporation demolished properties in Jahangirpuri under an anti-encroachment drive despite the Supreme Court having ordered a status quo on the demolition drive.

In large parts of India today therefore, that celebratory culture of killing, recorded on cellphones and circulated through social media, writes Praveen Swami (National Security Editor, ThePrint) “is becoming dangerously commonplace. In the lanes of small towns and in villages, real power is held by ideologically driven gangsters, not the institutions of the State….

“Last week’s ‘Ram Navami’ (Hindu festival)  riots, spread out across eight states, have underlined fears about the accelerating tempo of hate politics across India. There’s little evidence, it needs to be said, that riots have accelerated through Prime Minister Narendra Modi’s time in office…….”

Yet, says Swamy “something new is happening: street gangs, loosely organised around religious preachers or local leaders, are building the Hindu-nationalist state with low-grade, everyday terrorism. These gangs police what we eat, how we dress, our relationships, our words….."

Fieldwork conducted by the ethnographer Satendra Kumar shows the membership of these groups is driven by a massive cohort of unemployed or semi-employed youth, seeking agency and dignity through religiosity. In this world, Kumar notes, the masculinity-seeking of the young, small-time criminality, and grinding economic insecurity collide with an ostentatious religiosity.”

Starting Over in Kashmir