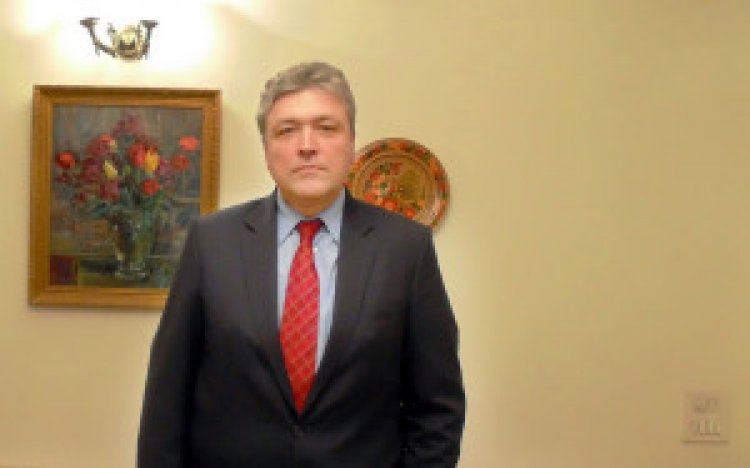 Ukraine is passing through difficult times. Asia News Agency spoke with the Ambassador of Ukraine in India H.E. Mr. Oleksandr Shevchenk, to know more about the issues with Russia and the possible manner in which India can assist. Exceperts from the interview are produced below.

ANA. Excellency, could you give our readers an update on the status of the crisis in Ukraine?

H.E.At present, separatists from so-called “Novorossiya” in occupied parts of two Ukrainian eastern regions (Donetsk and Luhansk) continue to ruin the normal life at the occupied territories. They are guided from Moscow and use terrorist tactics. The Russian Federation has supplied pro-Russian separatists with a large number of tanks, armored vehicles, rocket launchers and advanced air-defense systems. It is clear that without Russian help the terrorist forces could not have sustained so long and would have been defeated in August – September. We have undeniable evidence of ongoing direct covert involvement of the Russian military men in combat which suffered heavy losses. And it is a shame for Russia that leadership of this country denies involvement of its regular troops in Ukraine and secretly buries its soldiers killed in combat actions without any honour.

Today Ukrainian Armed Forces uphold ceasefire, which started on September 5th in accordance with the agreement reached by the Trilateral contact group in Minsk. At the same time, terrorists do not keep their obligations and threaten implementation of the peace plan introduced by Ukrainian President Petro Poroshenko. After the ceasefire’s announcement Ukrainian troops’ positions were fired at hundreds of times and a lot of servicemen were killed and wounded.

ANA. President Barack Obama has declined to supply Ukraine with “lethal aid” despite the plea for more military equipment that President Petro Poroshenko made to U.S. Congress on 18 September. Is there disappointment in your country over this development?

H.E.We have very good relations with United States as well as with our EU partners who unequivocally supported Ukraine during these tragic events.

Our bilateral cooperation with United States, in particular, in the sphere of security and defense has its own history and logic. The level of reception given to President Poroshenko during his last visit to Washington was very impressive by itself.

At this stage it became clear that Ukraine can withstand and localize the conflict with its own forces under the condition that Russia should stop providing terrorists with arms and ammunition as well as covertly sending its troops and mercenaries.

Therefore we believe that main efforts of the international community should be focused on diplomatic solution and to force Russia to uphold its commitments to the recently negotiated Minsk agreements.

ANA. Excellency, how does your country see the crisis getting resolved and what time-frame?

H.E.The only way to ensure de-escalation of the situation in Donetsk and Luhansk regions is the Peace plan that includes ceasefire, freeing of all hostages, withdrawal of Russian troops, establishment of control over the border, prevention of the supply of Russian arms.

Generally, the conflict could be resolved only on the basis of preservation of territorial integrity of Ukraine, restoration of legitimate Ukrainian authorities in Donbas with respect to interests of local population, bringing to justice those who perpetrated terrorist acts, committed war crimes and crimes against humanity.

We hope that restoring the work of Ukrainian border guards, establishment of buffer area with efficient monitoring and verification by the OSCE representatives will facilitate further de-escalation of the situation in the region and contribute to resolving the crisis in the coming months.

ANA. Do you see a role for India in resolving the present situation considering India enjoys good relations with both Russia and Ukraine?

H.E.India could play a positive role in resolving the current crisis in Eastern Ukraine as it enjoys good relations with both Ukraine and Russia. Though India abstained during voting on the UN General Assembly resolution on the territorial integrity of Ukraine, we hope that India under new political leadership will consider the ways of sending clear message regarding Ukraine’s sovereignty and territorial integrity.

Thousands of civilian victims in Ukraine are the result of Russia’s realization of its so-called legitimate interests. We hope that India will demonstrate new approach and re-evaluation of the situation in Ukraine. In particular, India could use its influence and moral authority to convince Russia to stop aggressive and destructive actions which destabilize situation in the region and in the whole world.
ANA. We understand Ukraine considers Euro-Atlantic integration its primary foreign policy objective as well as relations with CIS states. In this context, how important is India in the foreign policy priorities of your country?

H.E.In terms of foreign strategy, the European integration is of utmost priority to Ukraine. This goal was overwhelmingly supported by Ukrainian population at the recent parliamentary elections with pro-European parties winning constitutional majority.

In addition to the European vector of its foreign policy, Ukraine is interested in developing and maintaining friendly and mutually beneficial relations with other partners. Prior to the ongoing conflict we managed to develop and maintain friendly relations with all the neighboring countries, including former republics of the Soviet Union. We are also very much interested in developing mutually beneficial cooperation and partnership with India.

Ukraine considers India as an important international player and rising Asian power. India is an efficient, reliable and very promising partner, and we are confident that our economies have large and untapped potential for mutually beneficial bilateral interaction.

Notwithstanding the difficulties that affected world economy in recent years, the trade turnover between Ukraine and India raised steadily, and in 2012 reached the point of $ 3.3 billion.

It was agreed during recent Ukrainian-Indian summit to bring our bilateral relations to a new level of “comprehensive partnership”.

ANA. India and Ukraine have friendly relations with each other. Excellency, what is your assessment on the state of bilateral relations? Are there any areas of disagreement?

H.E.You are right that Ukraine and India enjoy friendly relations. We share similar views on the main issues of the international agenda – combating terrorism, piracy, poverty all over the world, reform of the UN Security Council etc.

As our trade turnover crossed the impressive marks we still have huge untapped potential. But there is one unresolved issue as India is not recognizing market status of the economy of Ukraine in the context of anti-dumping proceedings. We have requested the Indian Side to expedite consideration on this issue, taking into account Ukraine’s WTO membership and market recognition from the leading world economies.
ANA. Taking a 5 to 10 year perspective, Excellency, in which areas of mutual national interest where you see better cooperation?

H.E.After recent political developments in our countries which brought about new governments, we can work out a new agenda for our relations based on our previous achievements.
During recent years we managed to significantly activate our cooperation in different spheres. Two meetings of the Ukrainian-Indian Inter-Governmental Commission on Trade, Economic, Scientific, Technical, Industrial and Cultural Cooperation were held in 2011 and 2013. A number of Working Groups were established to boost cooperation in the spheres of trade, pharmacy, tourism, fertilizers, metallurgy and mining. And they proved to be effective and promising mechanisms.

We hope that Working Groups on cooperation in the fields of defense, aviation and power will be soon established by both sides and commence their work. Ukraine, which is known in India mostly as a builder of power plants and steel mills, according to estimates by international experts, in the near future will be among major suppliers of food to the world markets.

Ukraine is also among the leaders in the fields of scientific & technological researches, aerospace & military industries. High technologies are the area where both our countries could strive together for new horizons. Sustained progressive interaction between Ukraine and India is in the interest of our peoples and future generations.

H.E. Mr. Larbi Reffouh, Ambassador of the Kingdom of Morocco...