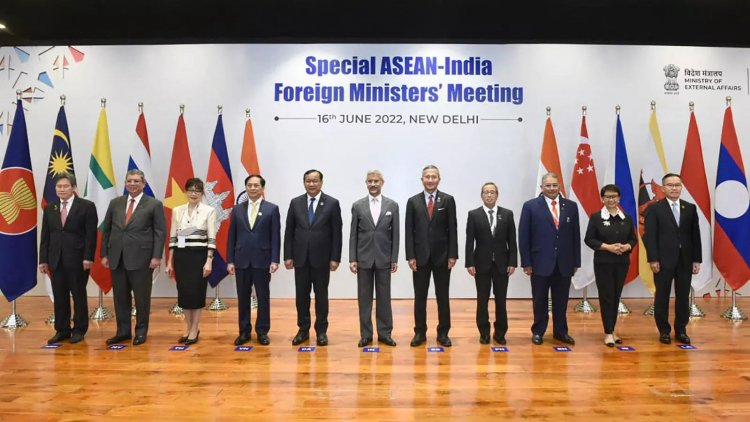 The ‘special meeting’ of foreign ministers in New Delhi last fortnight was to observe three anniversaries of South East Asia’s engagement of India. Each of the three anniversaries, writes K P Nayar (Strategic Analyst) “was a milestone in the evolution of Indian foreign policy after the end of the Cold War….” The ministerial meetings between India and ASEAN commemorated the 30th anniversary of India’s sectoral partnership with ASEAN, its summit-level partnership 10 years later and their strategic partnership in 2012.

All these are worthy of celebration through high-profile events, which the Ministry of External Affairs (MEA) lived up to.

“But the real purpose of the ‘Special ASEAN-India Foreign Ministers’ Meeting’ was to reassure ASEAN that India’s role in the later-day Quad, and the newest Indo-Pacific Economic Framework (IPEF), will not diminish New Delhi’s commitment to political and security ties with South East Asia or the Modi government’s economic and trade-based policies towards the region.”

Vivian Balakrishnan, the Foreign Minister of Singapore, told the meeting that ‘relations between India and ASEAN go back not 30 years, but thousands of years. Even our religions — Hinduism, Buddhism, and Islam either originated from, or vetted through India into South East Asia.’

The population of ASEAN countries is roughly half that of India. But ASEAN’s combined GDP is almost the same as India’s. The ASEAN ministers who came to New Delhi want both sides to join forces so that their GDP can be doubled or quadrupled.

India and the region’s perception of post Ukraine changes

External Affairs Minister S Jaishankar was forthright in assuring the visiting ministers that ‘India fully supports a strong, unified and prosperous ASEAN, one whose centrality in the Indo-Pacific is fully recognised.’ Just as they wanted reassurance that Quad and the IPEF will not short-change India’s ties with ASEAN, Jaishankar also wanted to know the collective views of ASEAN on how they see the world after the Ukraine war. India, it has been clear for a long time, is uncomfortable with a unipolar world in which one power is dominant.

Balakrishnan outlined his region’s perception of changes that are coming. ‘On the global strategic stage, we have transited from a unipolar moment — we are going past the bipolar world — and are emerging into a multipolar world. In that multipolar world, India will be a major tent pole, and so will, I hope, South East Asia. The question then is what could possibly derail our fulfilment of that potential?’

India must look beyond Russia

Balancing Relations Between Russia and US