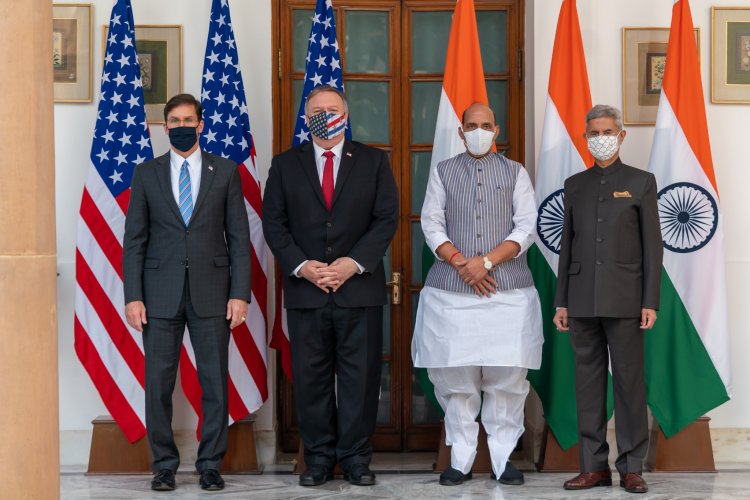 India and the United States Oct 27 signed a long-pending agreement for geospatial cooperation that will provide a deadlier edge to Indian missile systems, even as they decided to hold the inaugural Industrial Security Annex (ISA) summit later this year to further cement the two nation’s defence trade and technology cooperation.

The two nations signed the Basic Exchange and Cooperation Agreement on Geospatial Cooperation (or BECA) that will enable the US to share with India advanced satellite and topographical data for long-range navigation and missile-targeting.

These positive notes came during the ‘2+2’ Ministerial Dialogue between the two nations held today, amidst the two nations facing a challenge from the Chinese Communist Party (CCP).

In a joint statement after the dialogue held by India’s Minister of Defence Rajnath Singh and Minister of External Affairs Dr S. Jaishankar with US Secretary of State Michael R. Pompeo and Defense Secretary Dr Mark T. Esper, the leaders from the two nations said they also looked forward to the inaugural Industrial Security Annex (ISA) summit later this year, which would further strengthen defence industrial cooperation between both countries.

In Dec. 2019, during the second round of the ‘2+2’ Ministerial Dialogue hosted by Washington D. C., the two nations had signed the ISA that will help smooth transfer of classified military technologies and information between private companies of both nations to enable growth in their bilateral defence trade that has grown to over $20 billion already since 2007.

Rajnath Singh said the two sides held comprehensive discussion on range of key issues, and called the inking of BECA with the US is a “significant move”. Noting that defence projects for joint development of equipment had been identified by the two sides, he said, “our military-to-military cooperation with the US is moving forward very well.”

“We reaffirmed our commitment to peace and security in Indo-Pacific region,” Singh said, reflecting the sentiments expressed by Dr Esper, who noted that the bilateral defence cooperation is continuing to grow.

Dr Jaishankar said the India-US national security convergences have grown and the Indo-Pacific was a focus of the discussion.

Pompeo, in his remarks after the dialogue, said he and Dr Esper had visited the National War Memorial here to honour the soldiers, who sacrificed their lives for the world’s largest democracy, including the 20 soldiers killed by Communist China‘s People’s Liberation Army in the Galwan Valley in June this year.

“The United States will stand with people of India as they confront threats to their sovereignty and to their liberty,” Pompeo said. “Our leaders and our citizens see with increasing clarity that the CCP is no friend to democracy, the rule of law, transparency, nor to freedom of navigation – the foundation of a free and open and prosperous Indo-Pacific,” he said.

This strong message to the CCP from Pompeo was also reflected in the US Department of Defense‘s news service on the “2+2” dialogue. Here is what the report published yesterday said:

“Given China‘s increasingly aggressive behavior from Africa to the Himalayas to the South China Sea to Oceania, it is crucial that like-minded states oppose Chinese Communist Party efforts to reshape the international order in its favor.

“The existing order has benefited all nations of the Indo-Pacific region including China, which has grown to be the world’s second-largest economy under the protections of the existing system.”

After the dialogue, Pompeo and Dr Esper met with India’s Prime Minister Narendra Modi. “The Secretary and the Prime Minister pledged to further strengthen the US-India Comprehensive Global Strategic Partnership to better ensure the security and prosperity of both countries, the Indo-Pacific region, and the world,” a statement from US Department of State‘s Principal Deputy Spokesperson Cale Brown said.

Defence- and security-related portion of the joint statement

Advancing the Defence and Security Partnership: “Noting the 15th anniversary of the inaugural US-India Defense Framework Agreement, the Ministers commended what has become a comprehensive, resilient, and multi-faceted Major Defense Partnership (MDP) between India and the United States. They applauded the significant step of the signing of the Basic Exchange and Cooperation Agreement (BECA). They also welcomed enhanced maritime information sharing and maritime domain awareness between their Navies and affirmed their commitment to build upon existing defense information-sharing at the joint-service and service-to-service levels and explore potential new areas of mutually beneficial cooperation.

“The Ministers reaffirmed their commitment to deepening bilateral defense consultation and collaboration and to exploring opportunities to expand cooperative capacity-building efforts with partners across the region. They also affirmed their commitment to pursue increased cooperation between the Indian military and US Central Command and Africa Command, including broader participation in exercises and conferences, so as to promote shared security interests. The US appreciated India’s leadership in establishing an Information Fusion Centre for the Indian Ocean Region (IFC-IOR). The Ministers welcomed the positioning of a Liaison Officer from the US Navy at the IFC-IOR and the positioning of an Indian Liaison Officer at NAVCENT, Bahrain and reiterated their intent to assign additional Liaison Officers.

“The Ministers expressed satisfaction at the ongoing progress in the implementation of Logistics Exchange Memorandum of Agreement (LEMOA) and Communications, Compatibility and Security Agreement (COMCASA), including the expansion of secure communications capabilities to include secure video teleconference capabilities between their respective Navies, Armies and Air Forces as well as between respective Foreign and Defense Ministries. The Ministers welcomed the convening of the Military Cooperation Group (MCG) later this year to review bilateral military-to-military engagement including joint exercises, training and expert exchanges. They looked forward to interaction between the Special Forces of India and the United States.

“The Ministers welcomed the inclusion of the Royal Australian Navy in the US-India-Japan MALABAR Naval Exercise scheduled to be held in the Bay of Bengal and the Arabian Sea in November 2020. Highlighting the importance of deepening maritime cooperation and the growing sophistication of US-India naval cooperation, the Ministers welcomed the PASSEX carried out by the Navies of both countries. They also looked forward to the convening of the next edition of the Tri-Services Amphibious TIGER TRIUMPH HADR Exercise and Army Exercises YUDH ABHYAS and VAJRA PRAHAR in 2021. The US welcomed India’s co-hosting of the Indo-Pacific Armies Chiefs Conference (IPACC), Indo-Pacific Armies Management Seminar (IPAMS) and Senior Enlisted Leader Forum (SELF) in 2023.

“The Ministers decided to work together to realize the development of their respective defense industries. Acknowledging India’s contributions to the global supply chain of major defence platforms and commitment to defense innovation, the Ministers reiterated the importance of Defence Technology and Trade Initiative (DTTI), and stated their intention to fast track projects under DTTI. They noted with satisfaction the signing of a Statement of Intent (SoI) at the 10th DTTI meeting to strengthen dialogue on defence technology cooperation on several specific DTTI projects as well as a DTTI Standard Operating Procedure (SoP) for identification and development of joint projects. India looked forward to the participation by the US Government and defence industry at the upcoming Aero India in February 2021.

“Recognizing the importance of cooperation in defence innovation, the Ministers welcomed the inaugural meeting between the Indian Defence Innovation Organization (DIO-iDEX) and US Defense Innovation United (DIU) in July 2020.”

Reactions to the BECA signing

“The new BECA agreement is going to be a landmark event in the US-India relationship and cooperation. BECA will allow India to use US geospatial information to achieve very high military accuracy for weapon systems such as cruise and ballistic missiles, and advanced UAVs,” according to Esri India president Agendra Kumar. Esri is a Geographic Information System (GIS) software builder and offers the most powerful mapping and spatial analytics technology available.

“The way I see (it), the agreement goes beyond tactical objectives and includes exchange of geospatial-intelligence information for use by the government for defence and other purposes. The US would exchange technical and procedural information about methods, specifications and formats for the collection, processing, and production of geointelligence information with India,” Kumar said.

“This agreement would benefit India in a more strategic manner and enhance the adoption of GIS technology in key decisions. At Esri India, we have been working with different organisations to deliver GIS solutions for strengthening national security. We see this agreement as an opportunity for more engagements with defence organisations in India.”