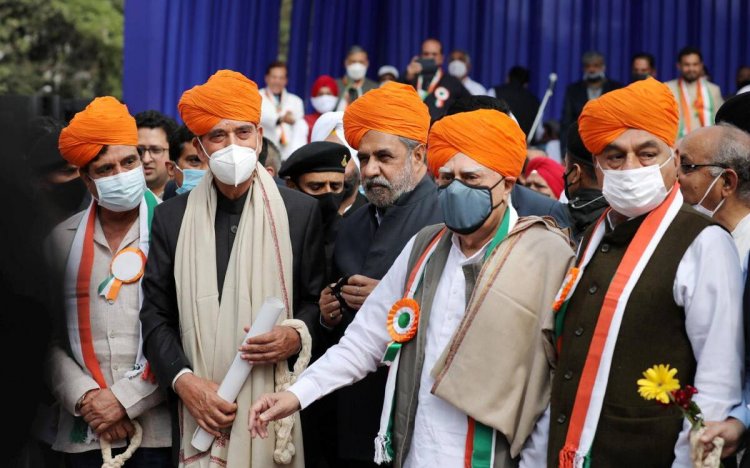 With their meeting in Jammu on 28 February, the 23 Congress dissidents (G-23) appear to have fully emerged as a caucus. They had earlier written to interim party president Sonia Gandhi in August last year demanding a “full-time and effective leadership”, as well as proper internal party elections. This had set the cat among the pigeons and since then there have been speculations of a possible split.

The G-23 have played their real hand, writes the Asian Age. “This can be seen to be in two parts. First, Ghulam Nabi Azad, the former J&K chief minister who days ago retired from the Rajya Sabha, where he was the designated Leader of the Opposition, was projected as Congress president by one of the most important dissidents, Kapil Sibal. Two, in his own remarks, Mr Azad did not fail to make a favourable mention of Prime Minister Modi, a reference to the PM,” who had praised him in the Upper House recently. Azad was critical of the BJP government at the Centre only to the extent of questioning the Modi government’s move to constitutionally reduce J&K from a state to a Union territory. He did not question the ending of J&K’s autonomy, setting himself apart from the position taken by the Gandhis in Parliament.’

The  Gandhis have  however, made it clear that Azad  should opt for political retirement because they don’t see any role for him in the party.

In a sign that the G23 is loosing ground, four senior Congress leaders who were among the 23 signatories of the letter sent to party president Sonia Gandhi seeking reforms in the organisation last year, Tuesday said they stand by their letter but disassociated themselves from the recent actions of some of their colleagues in G 23. These include former Rajya Sabha Deputy Chairman P J Kurien  who said he was not against efforts to improve the Congress and bring in much-needed reforms but argued that “the boundaries” should not be breached…..it should not become a dissident activity.” Other leaders include former Lok Sabha MP Sandeep Dikshit, Ajay Singh and M Veerappa Moilly.

Gandhi family and G-23 won’t give up

D K Singh (editor, politics, at ThePrint) says the Gandhi family will not give up.  “It is still oozing with confidence, with Priyanka Gandhi promising  to repeal the three controversial farm laws and Rahul Gandhi vowing not to implement the Citizenship (Amendment) Act in Assam.”

Gandhi family is so full of wisdom “that it can’t brook any advice from others on how to run the party. It won’t allow any voice, other than the family’s, in the decision-making process—something the dissidents are seeking to achieve by demanding election to the Congress Working Committee and the Election Committee. But G-23 members aren’t ready to give up as was evident from the tone and tenor of their speeches in Jammu……”

The G-23 members “know it’s a do-or-die battle. If they can’t galvanise enough support in the party, the Gandhi family would get back at them sooner or later—probably after getting Rahul Gandhi re-installed as Congress president in June. That’s why he is making frequent trips to Kerala and Tamil Nadu, and Priyanka, who virtually disappeared for months, is back in the field, addressing farmers’ rallies and meeting aggrieved families. If the Congress forms the government in Kerala and becomes a part of the DMK-led government in Tamil Nadu, it should bolster Rahul’s claim for party presidentship. Given the party’s dismal prospects in Assam and West Bengal, he would rather stay away from those states—or make guest appearances.

“If things fall in place as planned, dissenters can be taken care of after Rahul becomes the Congress president again. If that results in a split in the party, so be it…….” But “if the Congress gets another electoral drubbing, the Gandhi family may feel compelled to make a calculated retreat and talk peace while nursing its injured pride and preparing to fight another day. Otherwise, another split in the Congress looks inevitable.”