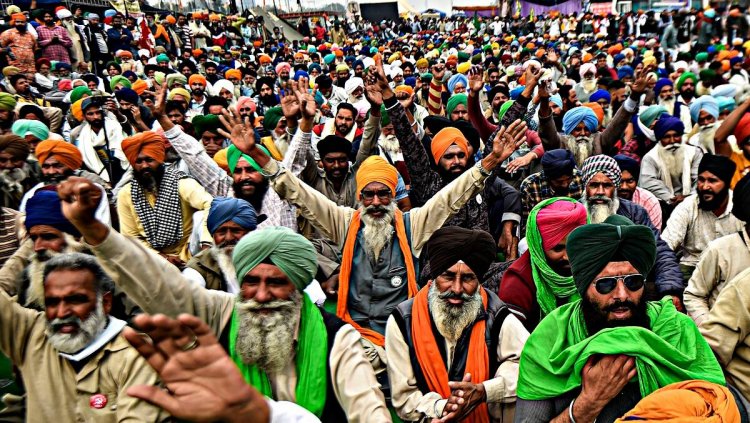 The agreement between the government and the farmers on two issues – power tariff and stubble-burning – underlines a step forward in the ongoing negotiations. However, the main stumbling blocks about the repeal of the three farm laws and  guarantees on minimum support price remain.

If the next round of talks, which will be the seventh between the two sides, indicates a closing of the  gap, it will be regarded as a breakthrough. As of now, however, the chances of such a turn of events appears somewhat remote. It is obvious that both the sides have taken an inflexible position. While the government is seemingly determined that the new laws will remain on the statute book, the farmers will have nothing to do with them.

It is clearly a prestige battle which precludes a retreat. Only once has the government withdrawn a bill which also dealt with land. That was soon after assuming power in 2014 when it decided to do away with a legislation approved by the previous government which had replaced the colonial-era  land acquisition act of 1894 with an enactment emphasizing the importance of “social impact” and “food security” when a buyer takes possession of a plot of land.

It is the same now when the government’s farm laws are being viewed as the thin end of the wedge which will enable the business magnates to enter the agricultural sector and begin to control it via contract farming once they can establish themselves. The two companies which are in the crosshairs of the protesters are those run by the Adanis and Ambanis.

Unfortunately, the telecommunication towers operated by the latter for their mobile network have become the targets of vandals with about 1,500 of the tall, steel structures being attacked in Punjab. It was perhaps inevitable that as the farmers’ agitation dragged on seemingly interminably with both sides digging in their heels, there will be groups which will lose their patience and target the assets of the suspected villains.

Tempers may have also become frayed because of the accusations of being secessionist Khalistani agents hurled against the Sikh farmers by elements in the ruling party. It is to be hoped that the stern action promised by the Amrinder Singh government in Punjab against the miscreants will prevent any further acts of hooliganism.

Besides, it is noteworthy that the farmers have been remarkably peaceful so far despite thousands of them gathering at various points near the Delhi border in the bitter cold. It was no different in the case of the Muslim women who had also gathered in a Delhi locality during last winter to protest against the citizenship laws.

Although neither of the two groups was, and is, under a single controlling authority, their discipline has been exemplary. The reason perhaps is that in both the cases, the discontent against the new legal measures has been so intense that the protesters were, and are, deeply conscious of their mission and what they needed to do for its success.

In passing, it has to be noted that even a BJP M.P., Subramanian Swamy, expressed regret at the government’s lack of “compassion” for the farmers, which cannot but cause some disquiet in the ruling party. Hence, perhaps, the insistence by a few like Defence Minister Rajnath Singh that the welfare of the farmers is uppermost in the minds of those BJP leaders who were born in peasant and underprivileged families.

For the party as a whole, the farmers’ protests are the most serious it has faced in its tenure so far. Moreover, it doesn’t seem to know what its reaction will be if there is no resolution of the dispute. If the farmers do not budge, the government’s refusal to take a step back may well be seen as something more than the lack of compassion.

In this context, the setbacks which the BJP has suffered in the local polls in Haryana will be of concern to it. Given the importance which the party attaches to such elections, vide the participation of Amit Shah and other big guns in the Hyderabad municipal contest recently, the Haryana results may be seen as a pointer to the disquiet among both the rural and urban populace on the party’s adamant attitude on the farm laws.

The BJP has drawn satisfaction till now from the weakness of the opposition, especially the Congress. The latter also appears to be aware that it tends to complicate matters by ham-handed interventions and thereby plays into the BJP’s hands. This is probably why it has stayed away from the farmers’ protests as it also did when the Muslims took to the streets against the citizenship laws.

But election results can send the message that even if the BJP’s opponents are flat-footed when it comes to confronting the ruling party on the ground, they can still make their presence felt silently through the ballot box.

Since politics is also a game of perceptions, any hint that the BJP is unsympathetic towards the farmers can affect the party in the forthcoming assembly elections in West Bengal and Tamil Nadu, two states where the BJP has traditionally been weak. The outcome of the next round of talks, therefore, will determine for the BJP much more than what happens with reference to the farmers.

Kashmir's local polls only half a step forward towards normality

India-China: Only a Partial Thaw