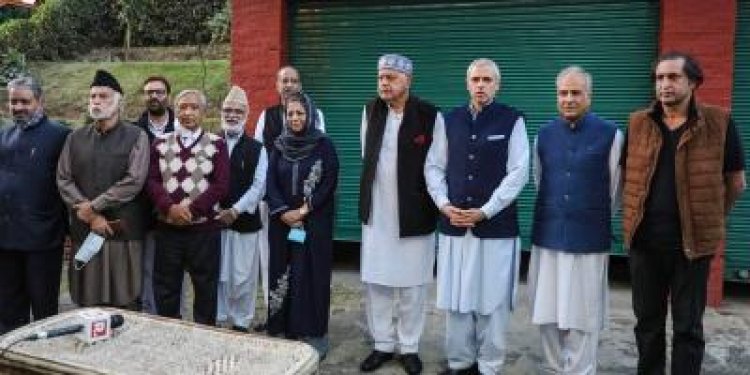 District Development Council (DDC) elections are to be held from November 28. This is the first time that the DDC is being filled through direct election. There is no sign of the Assembly election. The DDC, even with its limited powers, will at lest for the present, be at the forefront of development activity.

In a decision that some experts say is in the right direction, the National Conference (NC), People’s Democratic Party (PDP), J&K People’s Conference, other regional parties as well as the Communist Party Of India (Marxist), will contest the together. These parties had recently formed People’s Alliance for Gupkar Declaration. The decision holds potential, writes the Indian Express  “for melting the ice that had formed over all political activity in the state since August 5, 2019. It could not have been easy to arrive at this decision. After all, the freeze was not of their making, but the fallout of the new arrangements the Centre put in place last year. Mainstream political leaders and their party workers were detained, some for more than a year — many are still in detention — for no other apparent reason except that they would undertake political activity……After their release, each of the leaders spoke about how let down, how betrayed, they felt by the Centre. But these parties also realise that staying out of the political process, whatever its limits and constraints, is not the solution. Many of their workers have lost their lives to terrorism and the militancy.”

It is also “significant that these parties have chosen to contest these polls as an alliance. Such an alliance between the regional parties — specifically between the PDP and NC — was briefly contemplated after the 2014 election results, before the PDP decided to form a partnership with the BJP. That decision did not go down well in the Muslim-majority Valley, and the government collapsed under the weight of its own ideological contradictions, despite all hopes and expectations to the contrary. The PDP, which had canvassed votes in the name of keeping the BJP out, was seen as having betrayed Kashmir for the sake of power. Six years later, the PDP, as well as other parties, seem to have come around to the view that they need to unite to fight the BJP.”