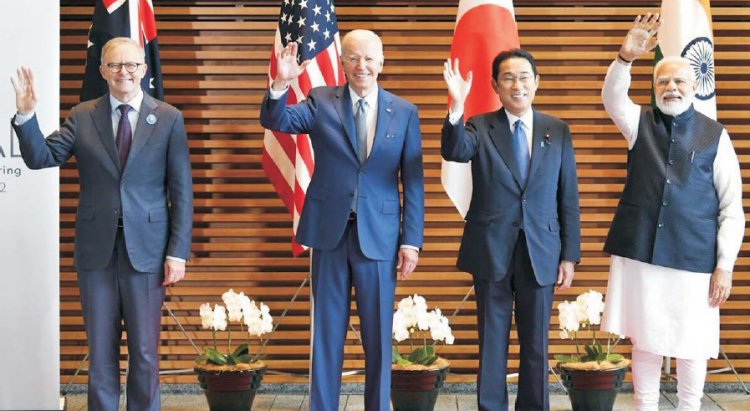 The fourth Quad summit at Tokyo, the second since the Russian invasion of Ukraine Ukraine, saw differences among the leaders of Australia, India, Japan and US on the war in Europe but unanimity in their response to China’s belligerence as they strongly opposed “any coercive, provocative or unilateral actions that seek to change the status quo” in the Indo-Pacific.

Significantly, while Washington and Tokyo were vocal in their criticism of Moscow — both US President Joe Biden and Japanese PM Fumio Kishida named Russia in their public statements — India and Australia did not do so in their opening statements at the summit.

Biden targets Russia: US President Biden’s formulation was the sharpest, hitting out at Russia and called the war a “dark hour in our shared history”.

In the presence of Prime Minister Narendra Modi, Japan PM Fumio Kishida and Australian PM Anthony Albanese, Biden said that this is more than just a European issue. “As long as Russia continues this war we are going to be partners and lead a global response,” Biden said.

Biden, who then spoke about the importance of the Quad in responding to Covid-19, partnering on 5G supply chains and launching the Quad fellowship programme, devoted much of his remarks focused on the war in Ukraine.

“As long as Russia continues this war, we are going to be partners and lead a global response,” Biden said.

PM Modi says Quad is a “force for good”: Without naming China, Prime Minister Modi said “The Quad is moving forward with a constructive agenda for the Indo-Pacific region. This will continue to strengthen the image of the Quad as a force for good,” He  said that the Quad grouping has assumed an important place in the world stage and the scope has expanded. He called for a free, open and inclusive Indo-Pacific. He said that despite Covid-19 posing challenges, the Quad grouping has delivered on vaccines, climate action, supply chain resilience, disaster response and economic assistance. He said that this ensures peace, prosperity and stability in the Indo-Pacific region.

Kishida for “a free and open Indo-Pacific”: Japanese Prime Minister Kishida  said it was important for the leaders to get together to make a “firm commitment” to “a free and open Indo-Pacific” and spoke about some of the topics of the meeting, including climate change countermeasures, maritime issues and technology. He warned the war in Ukraine cannot be a precedent. “A grave incident which has fundamentally shaken the rule-of-law-based international order we value has happened since we met last September,” he said.

Albanese “committed to the Quad”: Australian Prime Minister Albanese said “The new Australian government’s priorities align with the Quad agenda…I acknowledge all that the Quad has achieved, standing together for a free, open, and resilient Indo-Pacific region and working together to tackle the biggest challenges of our time, including climate change and the security of our region.”

The BJP hopes that the New Cabinet will burnish its Image