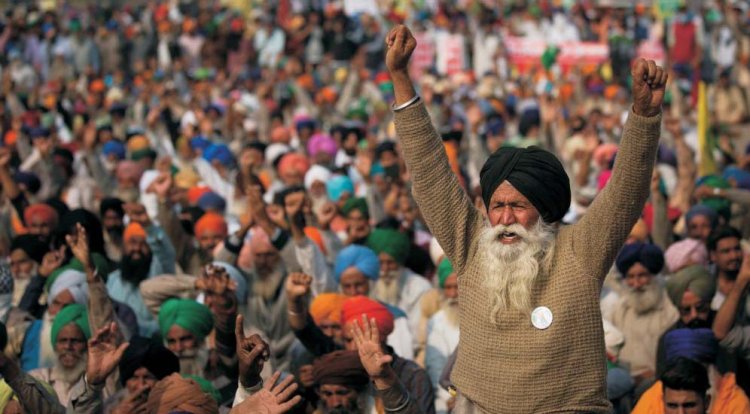 Neither the Supreme Court nor the government has been able to find a way to end the farmers’ agitation. Although another round of talks are scheduled, few will expect the two sides to reach an agreement in the near future.

The reason for the seeming deadlock is that both the government and the protesters are refusing to budge from their stated positions. While the latter are insisting on a withdrawal of the three farm laws, the government has ruled out such a retreat and will agree to only a few amendments, apart from guaranteeing a minimum support price for the agricultural products.

But, as the stalemate continues at various points on the border of the national capital where the farmers are observing their sit-in protests, the deadline of the Republic Day celebrations on January 26 is approaching. The government has already suffered a setback in its preparations for the prestigious event with British prime minister Boris Johnson cancelling his programme of being the chief guest at the ceremony because pf the worsening Covid-19 situation in his country.Therefore, the government can hardly allow the farmers to ruin the day by staging any kind of a demonstration.

The possibility that they can bring their tractors to the site of the parades has been enhanced by the holding of a tractors’ rally in parts of the National Capital Region on January 7 as a show of strength. An earlier occasion when the Republic Day function faced a threat was in 2014 when the newly elected Delhi chief minister, Arvind Kejriwal, tried to live up to his anarchist reputation of the time by interfering with the celebrations.

That threat was narrowly averted. It is possible that the farmers, too, will be dissuaded from acting in a manner which can hurt their own image and interests. But, as the D-day comes nearer and there is no solution in sight for ending the agitation, the government must be on tenterhooks. Its anxieties will be all the greater considering that the Congress M.P., Shashi Tharoor, and the Shiv Sena’s Priyanka Chaturvedi have called for the calling off of the festivities.

The government also hasn’t helped its own case by adopting various tactics to show the protesters in poor light. Although the earlier branding of them as separatists and anti-nationals has stopped, presumably because those making the charges realized that they were not cutting any ice, the government is now trying to present the farmers as not being represenatives of either the entire community or the poor among them, but a privileged minority, as an economist who is believed to be close to the BJP has written.

This allegation is in line with the depiction of the agitators as the votaries of vested interests who are blocking any attempt at reform lest it should deprive them of the advantages of a closed system to which they have long been used. The farmers are being placed, therefore, in the category of those who had opposed the 1991 opening up of the economy to replace the earlier public sector-dominated regulated economic system.

Aware of the aversion of the farmers to the private sector, the Adani and Ambani groups of business magnates have been clarifying that they have no interest in entering the agricultural sector. However, if they are building storages for grains, it is in accordance with an agreement with the public sector Food Corporation of India.

To what extent the farmers will accept this argument is unclear at the moment, but they may face some difficulties in view of the Supreme Court’s observation that the gathering of thousands of them on Delhi’s outskirts can result in the spread of the Covid virus. As is known, the earlier congregation of Muslim women protesting against the citizenship laws in the Shaheen Bagh locality of Delhi and elsewhere had dispersed because of similar fears.

But, as a few netizens have pointed out, such concerns were not aired during the election campaigns in Bihar and Hyderabad where the BJP fancieid its chances. However, wiill the farmers  follow the Shaheen Bagh ladies in ending their agitation ? In case they don’t, it is unlikely that the government will resort to force if only because the farmers as a rule and the Sikhs from Punjab are known for their toughness and resilience. These qualities have already been exemplified by their being able to withstand the winter cold and the recent rains while in sitting out in the open or in tents.

Moreover, the government will not like to do anything which will antagonize the Sikhs any further when the BJP has already lost the support of its former ally in Punjab, the Akali Dal, which is mainly a party of the Sikhs. But, it isn’t only the Sikhs who will be alienated, but also the farmers in general although the government claims that a section of them supports the new laws. However, a television report said that many of these groups are closely aligned to the BJP. The real picture, therefore, remains hazy.

But what is not unclear is that the agitation has blown wind into the opposition’s sails. While some of these parties have adopted resolutions in the legislatures in the states ruled by them, such as the CPI(M) in Kerala, others like the Congress in Madhya Pradesh have decided to hold “chakka-jaam” (stop the wheels) protests in every district for two hours on January 15 and march to the Raj Bhavan on January 23. Kerala was the fifth state to pass such a resolution after Punjab, Chhattisgarh and Rajasthan (all ruled by the Congress) and Delhi which is run by the Aam Admi Party.