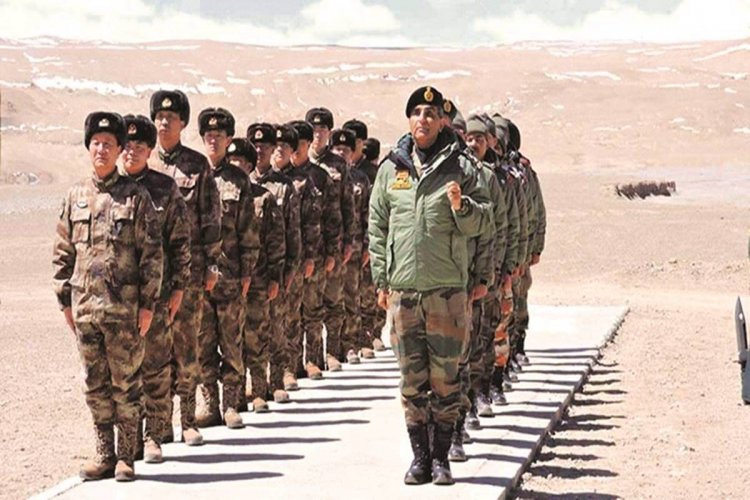 The high-powered China Study Group (CSG) met Tuesday after the fifth military commanders’ marathon meeting ended in a stalemate. India rejected Chinese demands for further disengagement on the Line of Actual Control (LAC) as “untenable.” The CSG asked the Army to convey that the proposal of “mutual and equal” disengagement at Pangong was “not acceptable” to India.

In the absence of any statement, official sources said “The focus of the latest round of talks was on the Pangong lake area but the Chinese side refused to undertake any further disengagement unless Indian soldiers also step back by an equal distance. That is untenable as it would mean forsaking our longstanding historic posts on the bank and de facto accepting the Chinese version of the LAC in the area. It was conveyed to the Chinese that status quo ante remains our aim and their proposal was not acceptable.”

There is a possibility of diplomatic talks or discussions being held at the level of Special Representatives to break the logjam.

According to sources, the disengagement process followed so far — on PP14, PP15, PP17 and PP17A — was based on the principle of “mutual and equal” stepping back from friction points.

The Chinese forces, sources said, had stepped back from Finger 4 on the northern bank of the lake towards Finger 5, even as the Indian side agreed to step back by an equal distance towards its post near Finger 2. “But any further stepping back would mean vacating the Indian posts in the area and that was untenable.”

The Chinese side has also not stepped back from the ridgeline on the northern bank, where it continues to be deployed at Finger 4, which is one of the eight spurs jutting out. According to India, the LAC passes through Finger 8. And since May, Chinese forces have come in eight km to the east of Finger 8 and strengthened their deployment in the area in the past three weeks.

Sources said that at PP17 and PP17A in the Gogra-Hot Springs area, the Chinese side had not followed the disengagement process, leaving soldiers from both sides separated by one kilometre. Because of the Chinese stance, sources said, the possibility of further progress at these two points remains slim.

During the commanders meeting, sources said, India also raised the issue of Depsang plains where its patrols have been blocked from accessing five points — 10, 11, 11A, 12 and 13. The Chinese side has been blocking Indian soldiers at a site called “Y-junction” or “Bottleneck” in the area, 18 km inside the LAC. This, however, is not linked to the current crisis.

With heavy deployment on both sides, Depsang is the most strategically important of all the friction points because of its flat terrain and proximity to the strategic DSDBO road and Daulat Beg Oldie airstrip near the Karakoram Pass.

This is diplomatic jargon for saying that border problems and overall bilateral ties should be kept on different, parallel tracks. This is contrary to the long-held position of the Modi government that peace and tranquility on the Line of Actual Control was at the heart of bilateral ties.

Meanwhile, Chinese ambassador Sun Weidong’s comments at a webinar organised by the Institute of Chinese Studies, have evoked comments and reactions. He spoke diplomatically on larger issues reiterating the Chinese position, but stuck to Beijing’s narrative of the Galwan incident, blaming India.

In its editorial, the Tribune says “in theory, the ambassador’s five points sound good. Indeed, ‘India and China should be partners, rather than rivals. They need peace rather than confrontation. They should pursue win-win cooperation instead of a zero-sum game. They need to build trust rather than suspicion, and bilateral ties should move forward rather than backward.’ It, however, remains to be seen what steps China takes to de-escalate and disengage in Ladakh to put these shibboleths into practice. The proof of the pudding is in its eating, and as of now, the Chinese fare has left more of a sour note rather than any pleasant aftertaste.”

Interpreting the ambassador’s remarks on Galwan, The Hindustan Times says talks or no talks, “Beijing is telling New Delhi that it will not budge. The chutzpah here is staggering. China wants the Indian side to pull back from what is Indian territory; it wants patrolling powers curtailed; it wants to convert the new facts on the ground it has created by violating past pacts into the new reality; it wants India to give up on its own territorial claims in the region; and all this while, it also expects Delhi to be held responsible for the stand-off in the first place.”

The Asian Age is of the same opinion. The bitter reality, it says “is that the military standoff is in areas that lie well to the west of the absurd claim line of China first propounded in November 1959 – as its westernmost region; in other words, many kilometers inside Indian territory, which India did not accept.

“The threat is that even if China vacates some of this in order to appear reasonable in diplomatic or military negotiations, it will still be inside Indian territory or on the Indian side of the Line of Actual Control (LAC).

“And the risk – on the basis of what appears to be in the minds of policy makers in Beijing behind the scenes – is that China may seek to compel India to accept the territories it may vacate as no man’s land.

“This means Indian patrols may not return to those areas. The Chinese ambassador in New Delhi was unambiguous in his public remarks less than a week ago that Chinese forces were within the ‘traditional’ frontier of China.”

And significantly, “the region China claims in Ladakh has been incorporated as part of its Xinjiang military district. This means China has pushed the Uighur country by thousands of square kilometers west of the Tarim river basin to which it is geographically, historically and culturally confined after gobbling up Aksai Chin in the 1950s.”

Mohan Guruswamy (policy analyst studying economic and security issues, held senior positions in government and industry; also specialises in the Chinese economy) has “always believed that with having obtained by hook or crook just about all they wanted in Ladakh, the real prize the Chinese are eyeing is Arunachal Pradesh.

“The Chinese based their specific claim on the territory on the premise that Tawang was administered from Lhasa, and the contiguous areas owed allegiance to the Dalai Lama.

“Of late, the Chinese have given a glimpse of what their true intentions are by laying claim to Bhutan’s Sakteng wildlife reserve area, which falls just below the Tawang tract.”

The Chinese, he says “are looking for a direct passage from occupied Tibet into the Assam valley.