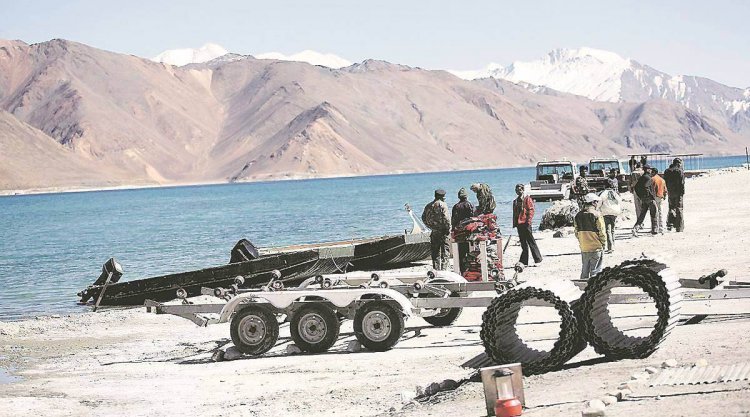 Although there was no major breakthrough in the eighth meeting of the senior military commanders of India and China on 6 November, the talks were not a failure. The takeaway is that India is considering a Chinese proposal  that a senior Army officer said is better than their previous ones and that it ” has gone beyond what they were stuck at”.

In May, Chinese troops had intruded 8 km west, up to Finger 4, the point which India says marks the LAC (Line of Actual Control) on the north bank of Pangong Tso to trigger a military standoff in Ladakh.  China has now proposed moving its troops back 8 kms to Finger 8, and return of troops by the two sides to their original locations on the south bank of the lake. The proposal also includes moving back tanks and artillery to the depth areas on either side to reduce chances of any incident.

The proposal includes creation of a temporary no-patrolling zone between Finger 4 and Finger 8, an official said, “to prevent any friction”.

According to India, the LAC passes through Finger 8 on the north bank of Pangong Tso. In May, Chinese troops came 8 km west, up to Finger 4.

After an initial round of disengagement in early July, the Chinese stepped back from the base of Finger 4 to Finger 5, and Indian troops moved to Finger 3. But the Chinese refused to vacate the ridge of Finger 4, and have been there ever since.

In late August, Indian troops surprised the Chinese by occupying dominating heights on the south bank of Pangong Tso, and in the larger Chushul sub-sector.

Indian troops positioned themselves on Gurung Hill, Magar Hill, Mukhpari, Rechin La and Rezang La. They now have direct view of China’s Moldo Garrison, and the strategic Spanggur Gap, which can be used to launch offensives — as the Chinese did in 1962.

Indian troops also readjusted their positions on the north bank of the lake, occupying features to dominate Chinese positions on the ridgeline connecting Finger 3 and Finger 4. This scramble for heights led to warning shots being fired by the two sides.

Earlier, in the sixth and seventh rounds of discussions between the Corps Commanders on September 21 and October 12, respectively, China had insisted that India first vacate the heights occupied by the troops in Chushul-Moldo area and the north and south bank of Pangong Tso. This was not agreeable to India, which has insisted that disengagement and eventual de-escalation of the entire region be discussed together, and has been demanding status quo ante, for the troops to go back to their April positions.

Hoping for mutually beneficial agreement: Army Chief: Meanwhile, Army Chief General MM Naravane Tuesday, mentioning the senior commander’s discussions, said “they are ironing out the modalities of how to proceed ahead within the overarching guidelines which had been communicated post the interactions and the meetings between the respective ministers”.

The defence ministers, he said,  had discussed that it “has to be an overall solution to the entire issue which brought this situation to the fore”.

In a statement, spokesperson of the Ministry of External Affairs (MEA), Anurag Srivastava,  said “The talks were candid, in-depth and constructive and both sides exchanged views on disengagement at all friction points along the Line of Actual Control in the Western Sector of India-China border areas.”

Srivastava said, “India and China have agreed to maintain dialogue and communication through military and diplomatic channels, and, taking forward the discussions at this meeting of the Senior Commanders, push for the settlement of other outstanding issues.”

China’s state-owned Global Times newspaper Thursday however,  said that the Indian media reports on a “detailed border disengagement plan” in the Pangong Tso area in eastern Ladakh between India and China are “inaccurate”.

The Global Times report said India always had “unrealistic” ideas about the Line of Actual Control (LAC) and disregarded history, unilaterally believing that Fingers 4 to 8 (on the northern banks of Pangong Tso) are its patrolling areas, and has sought to gain bargaining chips in talks by fishing for interests in the disputed border area.

The Chinese Army’s occupation of the area between Finger 4 and Finger 8 on the north bank of Pangong Tso in May 2020 is one of the most sticky points in resolving the six-month military standoff between India and China.

The Global Times report underlines the challenge of implementing any disengagement plan with China to end the six-month military standoff in eastern Ladakh. This is why India is moving cautiously in dealing with any agreement with the Chinese side.

After the Global Times report, Indian experts believe the status of the disengagement plan will become clear only at the next corps commanders’ meeting.

India needs to be watchful

Ignoring the Chinese media, The Tribune writes  “India and China have moved a step closer towards resolving the protracted border standoff…….The two armies have broadly agreed on a three-step process of disengagement of troops and withdrawal of weaponry from all major friction points — in a time-bound manner. The potential breakthrough comes two months after the Moscow meeting at which External Affairs Minister S Jaishankar and his Chinese counterpart Wang Yi had finalised a five-point roadmap to defuse tensions in eastern Ladakh……….”

Striking a note of caution however, the paper writes “China has been notorious for cocking a snook at past agreements, making it difficult for India to believe that the neighbour will walk the talk, as and when an actionable plan is formalised. Such a pact should be applicable to the entire LAC, including the fiercely disputed Depsang plains. The probability of China using the de-escalation exercise as a ruse to distract Indian troops is not ruled out…..”